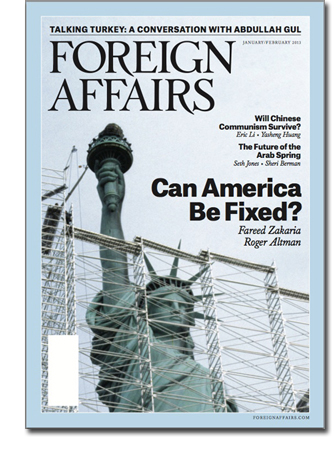 Foreign Affairs, the bimonthly magazine on American foreign policy published by the Council on Foreign Relations, is now at its highest print circ since launching more than 90 years ago. Citing second-half 2012 Alliance for Audited Media numbers, its total readership, which includes subscribers, sold newsstand copies and a small portion of non-paid circ, is at 163,000—10 percent higher than the prior year.

The growth, says the Council, comes on the heels of a 30 percent increase in cover price, from $9.95 to $12.99. According to the International Periodical Distributors Association, the magazine’s 31,584 single-copy sales grew 22 percent in 2012 following the price increase.

"Readership is at an all-time high for the magazine, but there’s an even more important story here," says Lynda Hammes, Foreign Affairs publisher, in a statement. "Our average price per copy renewal rate, and time spent with each issue continue to increase. This indicates a deep loyalty and passion on the part of our readers, who remain committed to the magazine’s unique and high-quality editorial content."

The brand charges the same price for a yearly print or digital subscription—$34.95—but bumps it up by $6 for a combined sub.

The magazine says it reaches another 16,000 readers via non-replica devices like the Kindle, and its iPad app has been downloaded almost 20,000 times since its November launch.