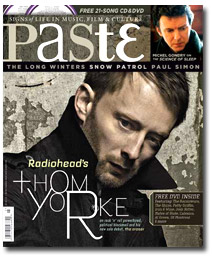 Inspired by the experimental rock band Radiohead—which asked fans to pay what they wanted for a digital download of its latest album—Paste magazine announced today it will allow subscribers for the next two weeks to name their own price for an 11-issue, year-long subscription to the magazine.

Jackson, editor of the five year old Decatur, Georgia-based music and film title, made the announcement today here at the American Magazine Conference.

Radiohead’s announcement earlier this month set the troubled record industry aflame, dividing fans and critics, pitting major labels against independent artists and inspiring other artists to rethink the way albums are released. Radiohead declined to release sales and download figures for the album, but industry sources put the numbers at album downloads at 700,000.

Paste president Tim Regan-Porter says its 120,000 current paying subscribers—who pay roughly $19.99 for a discounted annual subscription—can renew at their own price during the two-week period.

Multiple and guest subscriptions are allowed, Regan-Porter says. Those who pay more than the average subscription price, he says, will get their names printed in a future issue.

Apart from the accompanying buzz and potential press, the goal of the initiative, according to Regan-Porter, is to generate new subscriptions as opposed to revenue.