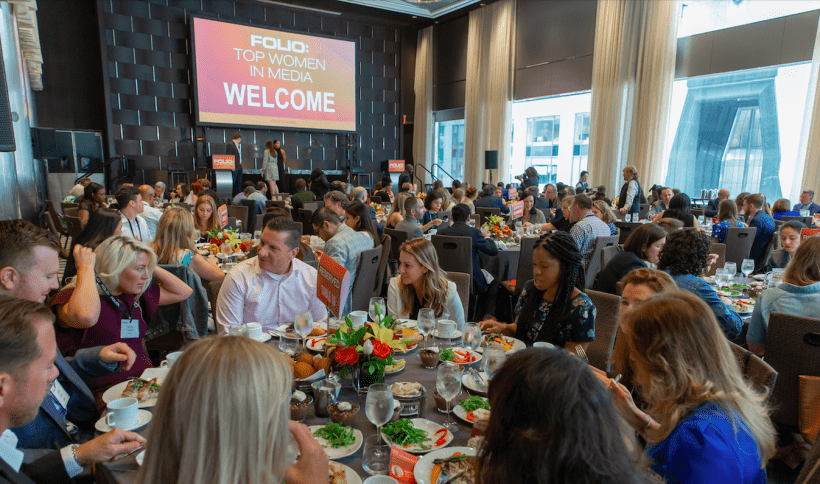 NEW YORK – 200 of the brightest leaders, creatives and business professionals in the magazine media industry gathered at the Grand Hyatt Manhattan Ballroom on Friday to celebrate the accomplishments made over the past year by Folio:’s 2019 Class of Top Women in Media.

The Top Women in Media Awards honors women who’ve stood out, taken risks and pushed their teams to new heights, and this year, two special honors were given to specific leaders who have had a greater impact on the industry as a whole.

The second-ever recipient of the Lifetime Empowerment and Achievement Award was Myrna Blyth, SVP and editorial director of AARP Media. With over a four-decade long career in the magazine space, Blyth fully embodies what it means to be, not only a Top Woman, but also a defining figure in the industry.

“We aim high and we value our readers’ time because Myrna has taught us these things,” said Bob Love, VP and editor-in-chief of AARP The Magazine, while introducing Blyth. 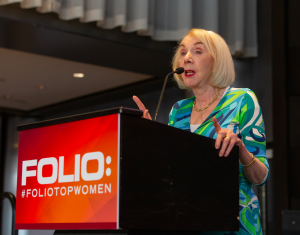 In her acceptance speech, Blyth challenged the audience to think more about aging and how they’re creating content that is aimed at an older demographic. “Things are changing, especially for women. Older women are no longer as invisible as they once were.”

She also encouraged the audience to challenge their own tendencies towards ageism, which she says has been engrained in our society. “Challenge ageism in yourself and how you depict people older than you, and hire people older than you. By doing this, you will have a have a larger career span that will hopefully end with you getting a lifetime achievement award.”

The Catalyst Award, which was newly introduced this year, was presented to Harvard Business Review’s SVP and group publisher Sarah McConville because of her success with driving a tremendous amount of subscriber and circulation growth over the past year.

Gail Day, publisher of the Harvard Business Review accepted the award on McConville’s behalf and said, “Sarah is first and foremost driven by innovation, so for her to be the first recipient of the Catalyst Award could not be more appropriate.”

The rest of the ceremony was dedicated to celebrating the achievements made by outstanding female media leaders across the six categories of Corporate Champions, Entrepreneurs, Change-Makers, Industry Trailblazers, Motivators and Up & Comers. The honorees talked about their career successes, highlighting common themes of the importance of teamwork and feeling honored to be in a room full of talented and extraordinary peers.

“It’s an honor to be amongst all these brilliant, talented women,” said Motivator honoree Seyward Darby, who is the editor-in-chief of The Atavist. “We focus on the craft of long form story telling that women are great at but aren’t always encouraged to do, so we want to encourage a more diverse group of writers.”

The Atlantic’s Johanna Mayer-Jones, who was recently appointed to the role of SVP of partnerships, and Diane Salvatore, editor-in-chief of Consumer Reports magazine—extraordinarily talented industry leaders themselves—served as the day’s guest presenters and helped to introduce the Motivators and Up & Comers and the Corporate Champions and Entrepreneurs categories respectively.

Some of the day’s other honorees include women who’ve launched stand out brands, such as ESPN’s Raina Kelley, who helped found The Undefeated, and Diane Anderson-Minshall, who spearheaded the launch of Chill, a vertical of Pride Media that serves the African-American and Latinx millennial community. And other honorees are those who are just starting off in their careers, but have already established a strong name for themselves, like Bleacher Report’s Mirin Fader, who is known for her ability to capture the grit of any story she covers, and Smithsonian Enterprises’ Perrin Doniger, who has helped increase Smithsonian.com’s unique views from 500K to over 10 million per month.

Entrepreneur Raina Kelley dedicated her award to those who are represented in the articles on TheUndefeated.com, which she is the managing editor of. “I’d like to dedicate this award to all the undefeated—the women, the men and the allies who fought through the isms, the schisms, the hatred, the stereotypes and never forgot their own voice and made something and made change.”

Click here to get to know the 2018 Folio: Top Women in Media.

Click here to see more photos from the event.

Thank you ⁦@foliomag⁩ for naming me one of the #FolioTopWomen in Media in the Up & Comers category. Big thanks BR squad: Ben, Jake, Ian, Matt, Elliott, Smoyer; & Jeff and Christina. Thanks for always making my work better. Grateful ? pic.twitter.com/hxYlQl1VLe

HCP Media is proud of our fearless leader, @MarisaBeazel for being named the @foliomag Top Woman in Media Corporate Champion Honoree! We are extremely proud of her and the other woman who have been honored at the award luncheon today. #FOLIOTOPWOMEN #WomeninMedia #HCPmedia pic.twitter.com/XMU6ofp2uu

Always love celebrating some IX Girl Power! So proud of our Head of Engagement, @jaimelevitt, for being honored at @foliomag’s Top Women in Media Awards as a Corporate Champion! #FolioTopWomen pic.twitter.com/bckuxEEer5