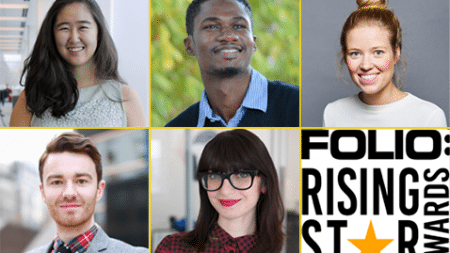 NEW YORK — Over 40 up-and-coming publishing professionals were honored at Folio:’s Rising Stars Awards Luncheon at the New York Hilton Midtown on Tuesday. The Rising Star Honorees are individuals who are making their mark and disrupting the status quo of magazine media, even in the early stages of their careers.

The afternoon’s keynote speaker was veteran magazine editor Myrna Blyth, who is currently AARP The Magazine’s SVP and editorial director. She shared her experiences overseeing the magazine with the largest circulation in the U.S., working as the longtime editor-in-chief and publisher of Ladies’ Home Journal, and being the founding editor and publishing director of More magazine.

“I’m living proof that a career in media no matter how media evolves, whether it’s in speech or in writing or print, digital or some future iteration, that there will always be a need for those who create content or market it,” said Blyth.

Blyth discussed her first career assignment for a teen magazine, which involved her covering a news conference for The Beatles, who had come to the U.S. for the first time, and made the point that while this event occurred before all of the Rising Stars were even born, the relevance of The Beatles still persists into modern day and that “the past and the present are closer in some ways than we have been led to believe.”

While chronicling her years at Ladies’ Home Journal, she said that while it was a monthly magazine, her focus was always journalistic and reporting on breaking news was still the goal.

“Journalism that appealed to women then, you may have noticed is really the basis of much of our news reporting today, as the last couple weeks have showed us,” said Blyth. “We really want the human interest news.”

The rest of the awards luncheon was dedicated to the Rising Stars honorees who represent all areas within the magazine media industry, including editors, writers, brand leaders, marketers, and salespeople. Nominated by coworkers, peers, and mentors, the honorees lay the groundwork for the continuation and the transformation of magazine brands.

As the honorees where called to the stage to receive their honors, they were prompted to give a five-word answer to the question, “What makes you excited to go to work?” And the responses got creative.

While a general theme coming out of the Rising Stars’ answers involved bribery via food, most reflected on the general feeling of doing something important, whether that is working to cover and combat climate change, uphold democracy, or represent the minorities within media.

Avital Chizhik-Goldschmidt, Life and Features editor at The Forward, said “telling stories of the silenced.”

Congratulations once again to this year’s class of Rising Stars! Read all about the 46 honorees here.

The cool thing about working at @Newsy is that no two days are the same. And today I went to an awards lunch and tomorrow I’ll script a show. And every day I feel so lucky to be living the gosh darn dream! #FolioRisingStars pic.twitter.com/rSqET3qxTh

i moved to nyc a year & nine months ago because my editors at b/r took a chance on me. today, @foliomag named me a rising star in media.

Eric Uhl of @ZoombaGroup accepts his #FolioRisingStars Award along with many others from some of the most renowned names in media. @FESmagazine &@RDDmag are proud of you Eric! pic.twitter.com/gJrj4xsTLr