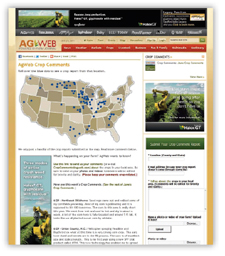 For an online community to survive, it has to provide enough stability for users to rely on, while remaining flexible enough to adapt to audience needs. Farm Journal Media’s AgWeb has done just that, earning a 2011 Eddy Award over a decade after its launch in 1998.

AgWeb underwent a redesign in August 2010. Greg Vincent, editor of AgWeb, says of the update, “We wanted to make sure we had the technology needed to best serve our audience. We focused a lot on the architecture and navigation of the site.” To better accommodate user needs, AgWeb was moved to a proprietary system provided by American Eagle.

AgWeb, whose users range from its main audience of farmers to traders and hedge funds in New York City, updates news content constantly. Stories are pre-posted and scheduled, so fresh news is available for farmers at their convenience.

Vincent says a recent coup for AgWeb is its coverage of the broker dealer MF Global crisis. “People think it’s a Wall Street problem, which it is, but it has had a huge impact on our users,” says Vincent. “We’ve had some commodity market insiders giving us information. It shows how we can serve our main audience, which is farmers, but also serve our audience in agri-business and the financial community.”

AgWeb’s discussion forums, which are divided into topics like “Talk Humor”, “Livestock” and “Policy & Politics”, are a large part of the site’s success. Vincent highlights the bonds created through this forum among the farming community, “Farmers are looking for a sense of community, and have found it on AgWeb. We had one of our members pass away a few years ago, a guy who lived in central Missouri, and one of the board members from Kansas was a pallbearer at his funeral.”

The self-dubbed “AgWebbies” find community outside digital platforms as well. “Once or twice a year, one of the farmers will host a get-together in their machine shop for all the AgWebbies,” says Vincent.

AgWeb receives about 3 million page views a month, with weekday traffic averaging between 120,000 to 140,00 pages views.