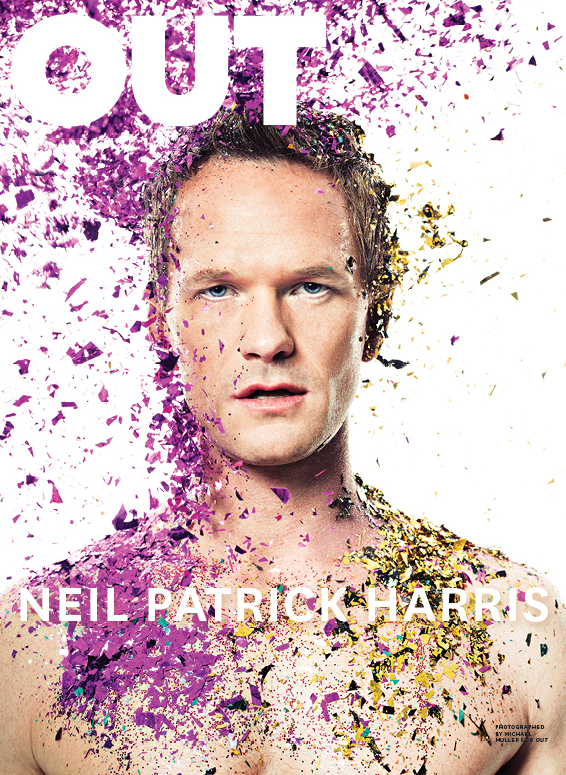 For Out’s April issue, design director David Gray says he didn’t want to take the easy route. To clarify, Gray says that the cover subject, Neil Patrick Harris, is a "smart and challenging person to shoot" so he wanted a cover that paired well with the actor.

"He’s not stupid about his image," Gray says. "He has been on TV and in movies since he was a kid. He’s always been cautions and clever. But now that he’s breaking away from TV and doing Hedwig, and the whole sexuality thing that comes with it, he was up for a bit more fun."

Gray admits there were several concepts the team was throwing around before it landed on the "glitter bomb" cover-including face paint and an 80s theme. "We did a whole bunch of other shots, and the inside of the mag has some of those images."

However, for the cover, Out wanted something that was vibrant but also understated. That posed a challenging question to the design team: How do you make the logo distinct without taking away from the picture? It was an important question to ask because a magazine’s banner and its coverlines are often catalysts when it comes to getting an issue to fly off newsstands.

The result was the stark white typography that Gray says has a "peeled off" look. "The picture was exactly like you see it," he says. "It was important to not have any [color] bleeding. We wanted it really simple, especially because most people first see covers digitally now."

The cover was executed exactly as planned and the final product looked as he hoped. That said, Gray concedes there are always things he might do differently.

"In this case I wonder if we should have actually put more thought into the glitter being lifted off," he says. It looks like we did that, but we actually placed the logo over the glitter."

There’s no question that this pops and is a very successful cover. What I like most about it though is the concept; Harris doesn’t normally play up his sexuality, so presenting him this way looking like he’s the drum major in a Pride Parade was a great idea. Having said that though, I wish they’d gone a bit further, (a drum major’s hat and vest could have worked well, for instance. It would also have been eye catching to see some more skin, or at least for the pose to have been pushed more sexually.

What I like least about the cover is that I find Harris’s expression too understated; it’s somewhere in between a beckoning lip-lick and a yawn. For a cover, I think you need a bit of clarity. I’m reminded of the recent New York Michael Douglas cover where they managed to achieve a provocative homosexual appeal with just some eye make up.

As for the type design, I like the choice of white, and how the logo looks almost as though it’s traced out of the glitter. But, dare I say it, more glitter?

As much as I love the glittering colors and adore the actor, that slack-jawed, open mouthed, dead-eyed stare reminds me too much of the direction given to underage models. It’s like it aims for flashy, edgy and wild, but Neil Patrick Harris got bored and it lost its subversive edge.

I wish it were truly messier, because Hedwig is a hot mess and this actor is a smart, out and proud guy. Isn’t it missing the emotion, an angry itch, real frustration or heat?