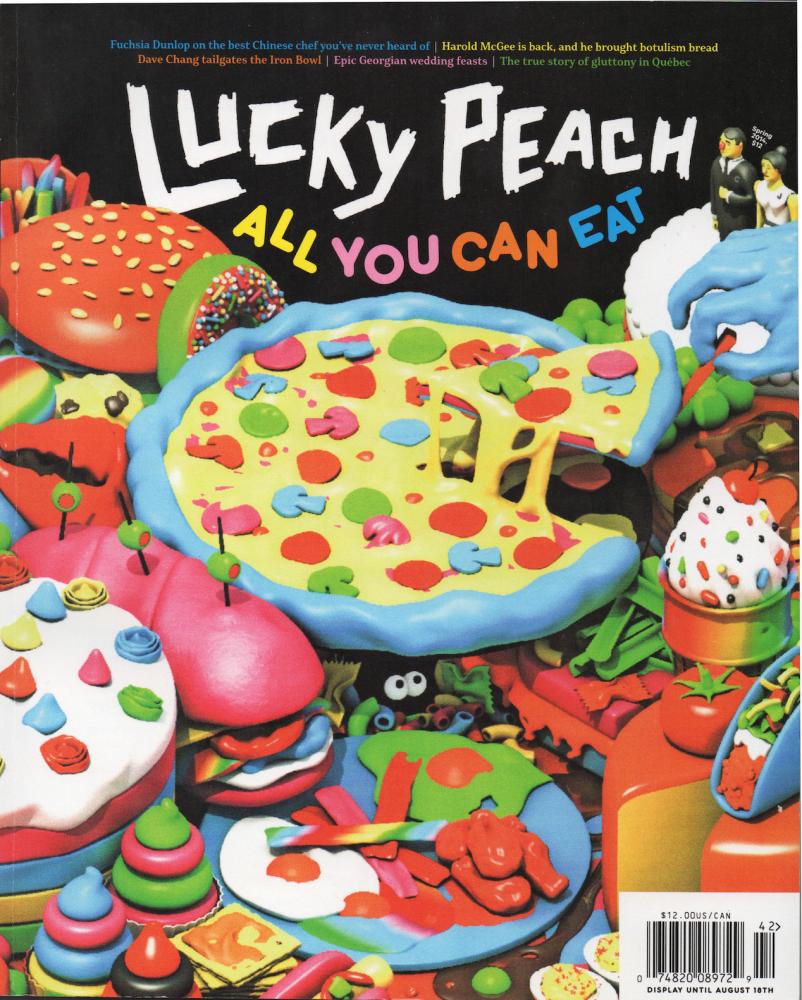 The Spring 2014 cover of Lucky Peach magazine is a tasty, illustrated concoction that highlights its "All You Can Eat" issue. It's a very unusual and very creative cover with a 3D illustration by Jordan Speer that looks straight out of an old Gumby claymation cartoon. I think this is a brilliant cover, very different and unique compared to most other food magazines. And it's simply one of the most fun covers I've seen this year. Not only did this delightful cover illustration convince me to buy the magazine, but everyone who has seen my copy has grabbed it away and started reading.

"I was a chef for 10 years," says Caysey Welton, associate editor at Folio:. "So I'm bored by a lot of food covers these days. But this one is fresh and cool." He is spot on with his analysis. At my local Whole Foods, this cover jumped out at me, amidst a wall of food and health magazines, all of them featuring beautiful, sensual, refined photographs, very sophisticated and well-polished in their design and styling. By comparison, Lucky Peach looks like a funky homemade dish that cares less about being perfect and pristine in its presentation, but with a much greater sense of passion, delight and soul.

Lucky Peach is the quarterly food and eating magazine brainchild of Momofuku restaurant owner and chef David Chang. Originally published in partnership with McSweeney's, Lucky Peach ended the relationship late last year; this is the second issue published as a completely independent operation. 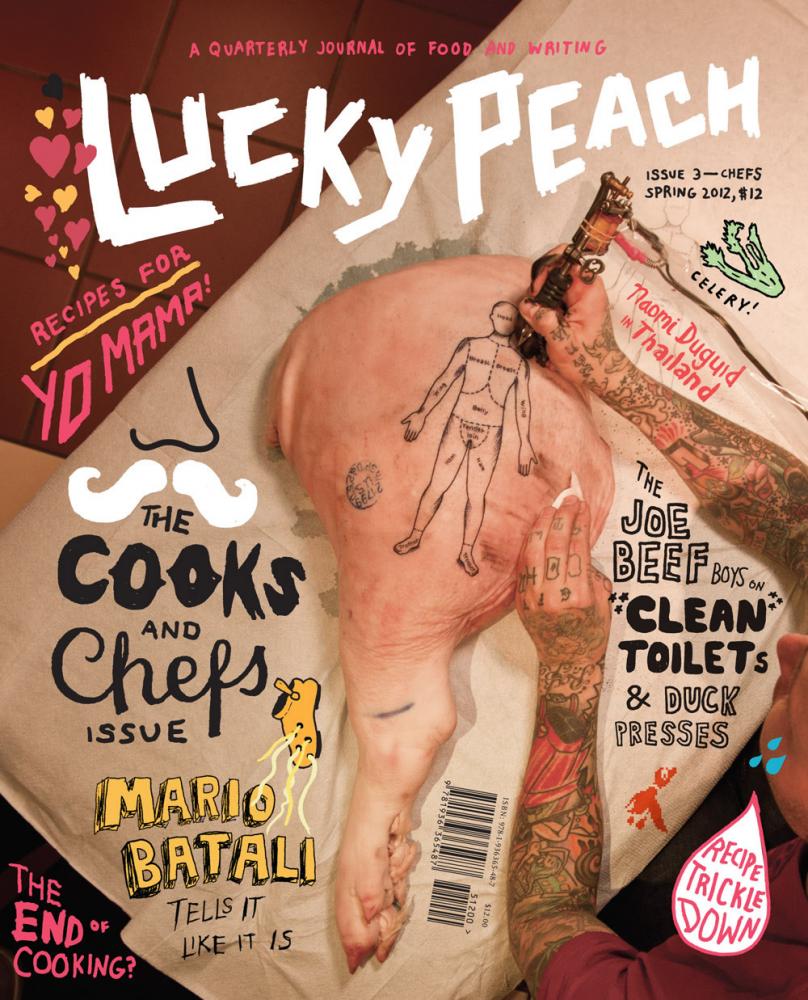 This cover, art directed by Walter Green, is a big departure from Lucky Peach's first few independent issues. Those covers were raw, punky, graphic and somewhat off-putting, with photographs of big slabs of raw meat, knives, and burly tattooed arms and hands. The typography and headlines were aggressive, and the overall feel was very masculine and almost fatally hip. Honestly, I didn't like it and thought it was the wrong approach, although it was certainly effective in getting attention. 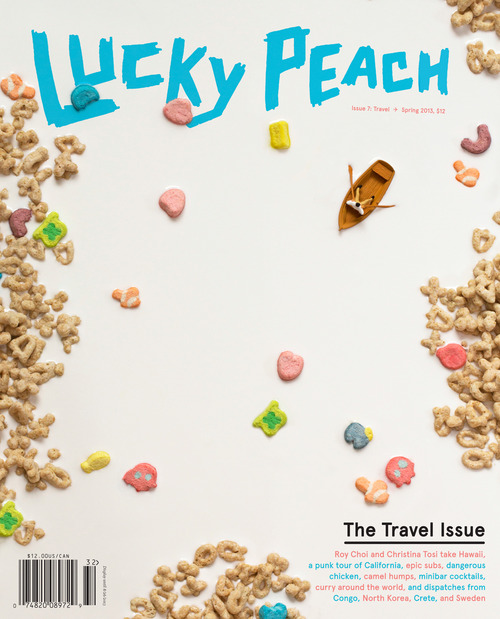 Fun is really the key to this cover, and that's what makes it so unique. It's rare to see a magazine cover that looks like it was actually fun to make, while also keeping it representative of the richness and quality of the material inside. For a sense of what Lucky Peach looks like, visit their Tumblr page, which is an explosion of exciting graphics and visual inspiration. 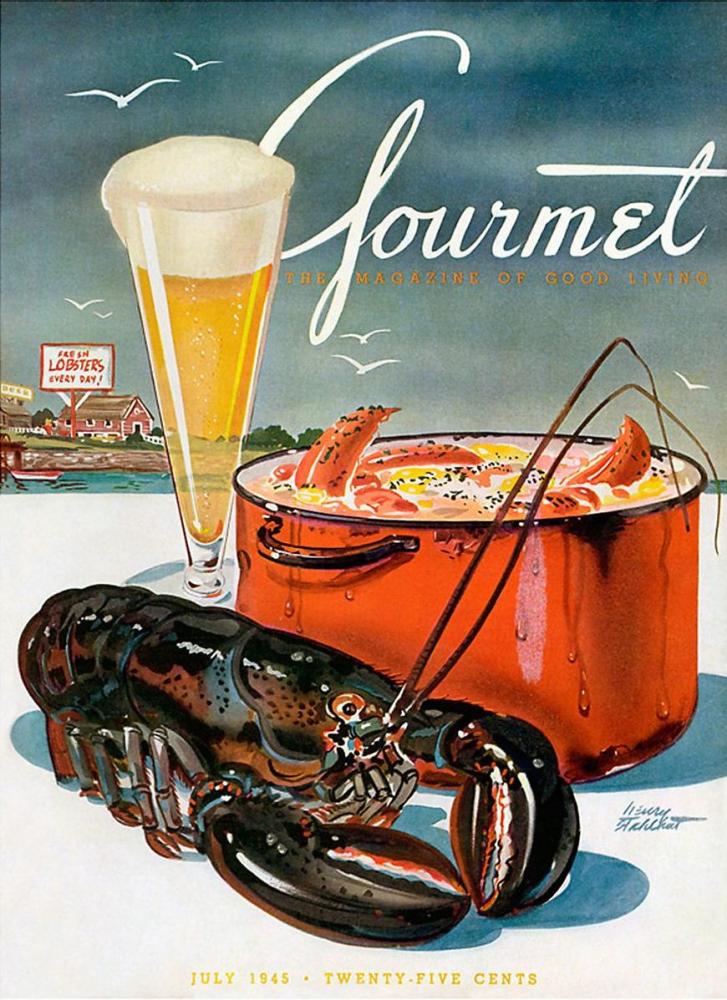 Lucky Peach is somewhat of a throwback to the illustrated Gourmet magazine covers of the 1940s and 50s. Those covers were artful but zany and quirky. Often illustrated by Henry Stahlhut, the illustrated Gourmet covers were the total opposite of the perfectly styled plates of food and gourmet dishes on magazine covers today. The "All You Can Eat" cover reminds me of Bloomberg Businessweek, with its pure disregard for any of the standard operating techniques of its genre.

I took my daughter to the Momofuku Noodle Bar in the East Village of New York City over the past weekend to celebrate her 14th birthday. She's a big fan of the Momofuku Milk Bar on the Upper West Side, where she favors strawberry milkshakes and pork buns. At the Noodle Bar she ordered Momofuku Ramen, while I gave up my meatless diet for a bowl of Spicy Miso Ramen (with chicken and pork broth). The food was hearty and delicious, and sitting in the restaurant at one of the long communal tables, I was reminded why the Lucky Peach cover is so perfect. It's a lot like the Momofuku restaurants: funky, uncompromising, hip (but not hipster), downhome and totally delightful and tasty. Like any great cover, it engages the readers in a visual conversation and invites them inside to discover a world of wonders, while at the same time maintaining the essence of its brand.