Face Up Online: Essence
The First Lady is first in magazine covers. 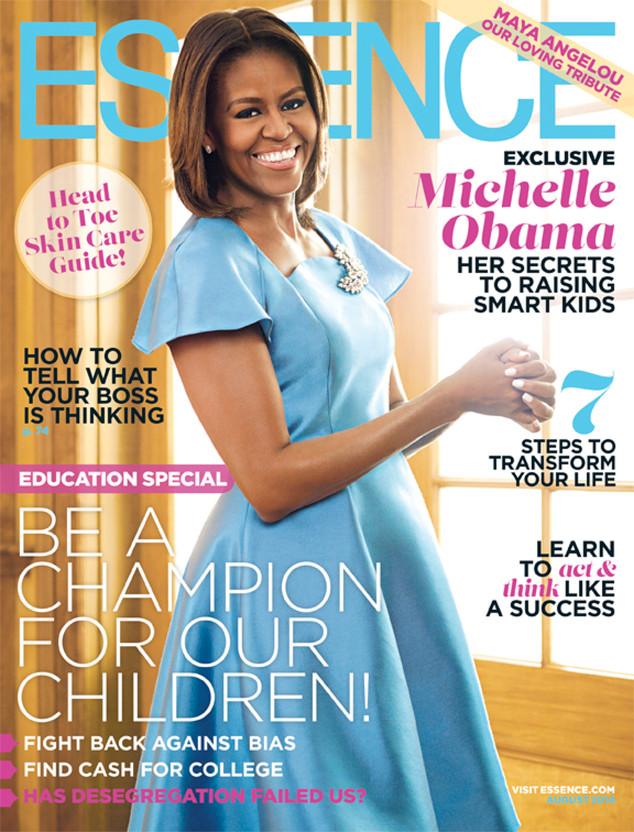 Michelle Obama has become a top magazine cover celebrity, arguably the top celebrity in terms of breadth and frequency of appearance. I can't think of anyone else who makes such a stylish splash every time she appears on a cover, and who also appears on so many different types of covers. I'm sure Baby Boomers who still adore Jackie Kennedy will disagree, but for my money Obama is by far the all-time leading First Lady in terms of iconic magazine cover appearances.

The August 2014 cover of Essence features Obama on what is her fifth cover for the magazine. The photograph is by Kwaku Alston, who has shot a number of her covers for various magazines, including the October 2011 issue of Essence, which is one of my favorites of the First Lady. On this cover, designed by Essence creative director Erika Perry, Obama is wearing a dress by the young American designer Azede Jean-Pierre. Alston's experience photographing Obama shows; she is relaxed, engaging and her smile jumps off the cover. Magazines struggle to get the kind of relaxed intimacy from celebrities that Obama consistently exudes in her cover shoots. And this cover exemplifies that. 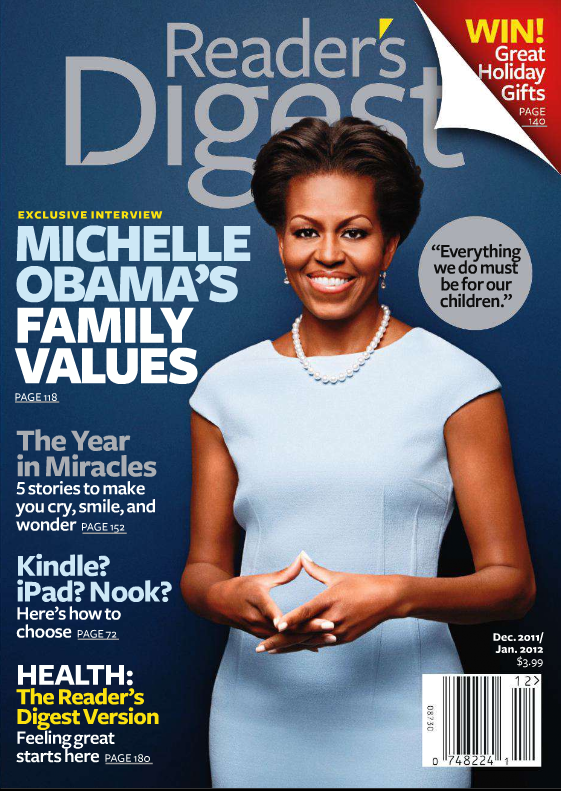 I was part of a team that photographed her for the cover of Reader's Digest back in 2011. I've talked with a number of art directors who have photographed her for covers, and their experience seems to be universal. You get the option of setting up in a handful of rooms in the White House, including the First Lady's office. There's no advance notice of what she is going to wear, and her personal team handles her styling and makeup. No one gets more than a half hour with her (and often less). In fact, during the Reader's Digest shoot I kept a stopwatch running on my phone that I kept flashing at her assistant every time they tried to wrap up the shoot before our promised half hour. Still, within those parameters she's a gracious, cooperative subject who definitely knows how to work the camera and create brilliant cover images. That's one of the big reasons she's had so many smart and diverse magazine cover shoots. Obama's list of magazine covers in the past five years includes Vogue (twice), People, Reader's Digest, Parade, Parents, Good Housekeeping, AARP, Condé Nast Traveler, More, Glamour, Ladies' Home Journal, Prevention, Ebony and Better Homes and Gardens. The list is nearly endless. She's even been illustrated on the cover of The New Yorker. And she rarely seems to repeat the same clothing designer, which is quite a feat! 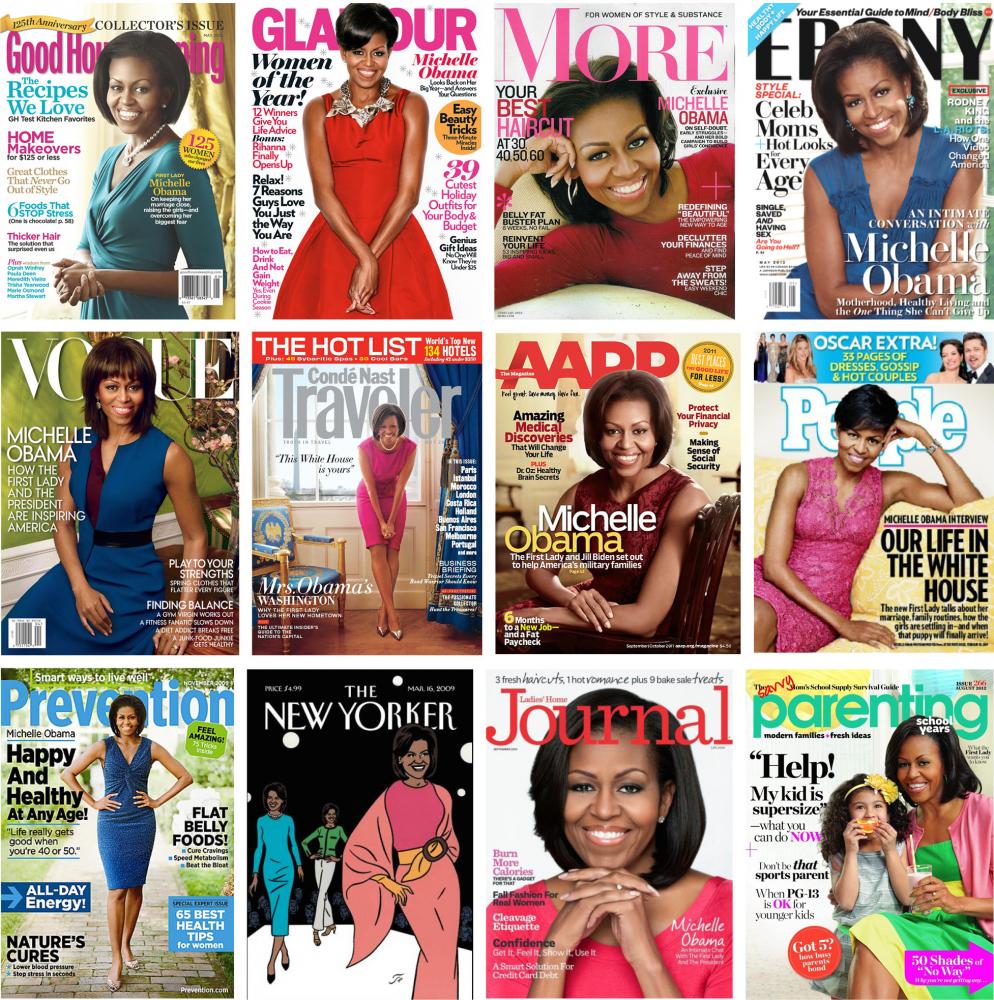 The most challenging part of the Essence cover is that it was shot in front of a brightly backlit window. The result, as anyone who has worked in this kind of situation knows, is uneven lighting, false colors and shadows in the wrong places. On this cover the photo ends up with an oddly faded-out section on Obama's lower arms and hands–just compare them to the rich color and texture of her upper arms. That said, while the blown-out background does not help Obama, it provides the perfect backdrop for a set of nicely articulated cover lines, all of which work to good effect. The editors and creative director manage to cram in a healthy amount of cover lines without overwhelming the photo. Arguably the very elegant thinness of the type in the "Head to Toe Skin Care Guide!" circle is a little too delicate for its usage here, and I would have avoided the unfortunate collision created where the "Education Special" pink nugget that appears to be poking the First Lady in the back and creating unnecessary visual tension. Still, those are minor quibbles. This is a tight, bold, modern, engaging-looking cover that works well both on newsstand (I bought a copy) and online (where it first grabbed my attention). Like its subject, this cover has an incredible sense of style.

Essence deserves credit for referencing children so directly on this cover. Cover lines about children are rare on women's magazines. When I was the creative director at Real Simple we had a guiding principle that children were rarely mentioned and pictured, and certainly never on the cover. I think the feeling was that it would take away from the escapist and aspirational aspects of the magazine. I haven't done a scientific survey of contemporary women's magazines on this subject, but my casual surveillance at the newsstand this week corroborates this.

Obama has mastered the art of creating iconic magazine cover images. There's not another person in politics who conveys such a sense of power, style, grace, beauty, intelligence and sex appeal, except of course, her husband Barack. While Barack Obama, as with other Presidents, has aged considerably with the job, Michelle looks even better and more energetic than she did in 2008. I would go so far as to say that I don't see any celebrities of any kind who have been able to create such a powerful set of cover images in such a short period of time.

Obama has dozens of solo magazine covers to her credit, and that doesn't even include the ones she's been on with Barack, or teamed up with other people, including her mother and Jill Biden. Even more impressive is that this unbroken string of successful covers has come during a time of fierce and heated political opposition to the politics of the Obama Administration, and by extension, to Michelle Obama. This cover shows, once again, that no one commands a magazine cover like Michelle Obama.