Face Up: The Best Magazine Covers From the Worst Year
9 picks that sum up 2020 (so far).

What can you say about this year that hasn’t already been said? Not much. So instead of dwelling on the pain this industry, as well as this country is facing, we want to focus on some of the best cover design work of the year so far.

We reached out to our community of magazine creatives and asked to share their favorite cover of the year. As usual, these covers tell the story of 2020 through their arresting visual design and subtext.

Click any of the covers below to view them full-size. 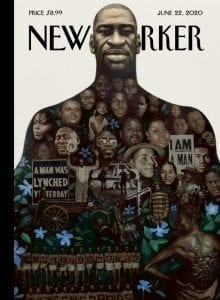 The New Yorker‘s June 22 cover, with its powerful “Say Their Names” painting by Kadir Nelson, stands out for me as the most memorable cover of the first six months. Inspired by the ongoing Black Lives Matter movement, and published just before the Juneteenth celebration, this cover combines art, history, political activism and much more, as Nelson uses the killings of George Floyd, Breona Taylor and other black men and women to connect the historical dots to lynchings, the murder of Emmett Till, slavery, the police beating of Rodney King, as well as to the Black Power and civil rights movements.

This is more than just a cover; it’s a learning tool and a call to action, as well as a beautiful tribute. Nelson has done a series of distinctive covers for The New Yorker, but this one features a much rawer and immediate style, very passionate, but also very intimate and respectful in the portraits of those killed by the police. I can’t look at this cover without getting emotional. The first time I read through the annotated cover online I was brought to tears, and the cover also inspired me to take my teenage daughter to the Juneteenth Jubilee march in Harlem a few days after it came out. This is a cover for the ages, museum-worthy, but also T-shirt and poster-worthy as well. Great stuff! 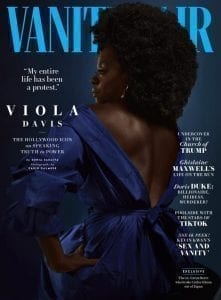 Vanity Fair‘s July/August cover featuring Viola Davis is my favorite of the year so far.

It features the work of artist Dario Calmese—the very first black photographer to shoot a cover in the magazine’s 107-year history. Viola’s skin glows and the lighting is so elegant and intentional. I love that the work is inspired by ‘Whipped Peter’—a nod to black art and black history. 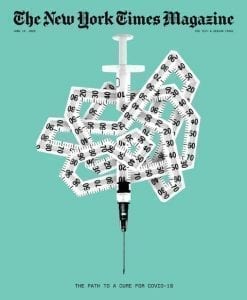 The NYT Magazine cover for June 14 addresses the realities of vaccine development and testing. Without overtly choosing a side in a divisive argument, TNYTM showed us what any experienced researcher already knows: vaccines are complicated, hobbled by setbacks and rethinking, and high hopes and letdowns. With this brilliant illustration and stark cover, TNYTM reminds us that we have a long road ahead of us. Stay healthy, wear a mask, save a life. 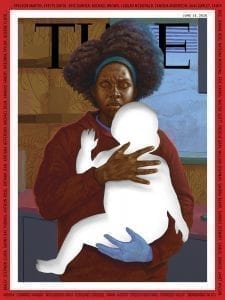 The first half of, auspiciously numbered, 2020 has been a time of unprecedented pandemic and demands for an end to systemic racism—too often resulting in the deaths of African Americans at the hands of police. It’s no wonder that it has also been a period of groundbreaking covers across international, national and local magazines. In all honesty, it has been hard to choose just one since there is so much to appreciate.

Covers and cover stories had been remade at a moment’s notice as events unfolded—some showcasing inventive type solutions when either time or resources made other approaches impossible. The power of reportage photography has again found voice with abandoned urban landscapes, emotionally devastating frontlines with healthcare workers and streets once again filling up but this time with BLM protestors. Equally compelling and thought provoking has been the use of illustration. It is worth noting the The New Yorker‘s cover tribute to George Floyd and Black History by Kadir Nelson—including its interactive online version with bios for all the painted portraits and the significance of periwinkle flowers.

My favorite cover of this half-year also addresses Black Lives Matter with a painting, Analogous Colors, by Titus Kaphar for Time. A Madonna and child but as heartbreaking pietà—the cover shows a Black mother holding on to the negative space of a child created by Kaphar actually cutting into his canvas. From Time and the artist: The image references Floyd calling out for his mother during his arrest, as he was pinned to the ground and held down by police officer Derek Chauvin for 8 minutes and 46 seconds. If I had one quibble it might be that this cover warranted one of Time’s few departures from its signature red border, perhaps turning it black as a nod to the movement and the names listed of men, women and children killed. It bears noting that these illustrated covers were created by Black artists whose voice is much needed at this time but whose representation in magazines has been sorely, systemically, underrepresented. 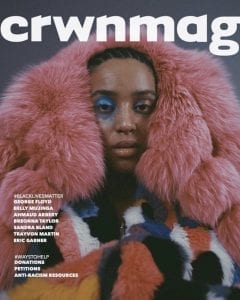 My choice is CRWNMAG, a magazine “telling the world the truth about Black women by showcasing a new standard of beauty.” They are a Black-run publication and their imagery is stunning.

Recently, they also participated in the #Voguechallenge, and this particular cover caught my eye. The colors are vibrant yet subdued; the typography is bold and compliments the photography.

It’s important that we emphasize and amplify Black voices in forms of art and print alike. 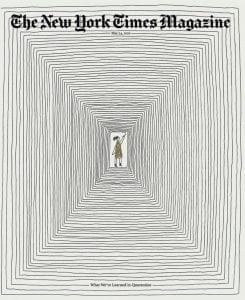 Brian Rea’s illustration for the “Quarantine Journal” says so much with so little. The repetition of concentric lines. That perfectly imperfect line quality. And you, in the eye of that storm. The simplicity leaves room for your personal experience. The representation of your isolation a trojan horse of the physical, which takes you to the psychological. Depending on your mood, you might feel uncertainty, anxiousness, or monotony. Maybe joy, if you were particularly tired of listening to your cubicle mate scream-cough every day.The best part? The line doesn’t end. Geez, I just depressed myself. Anyway, it’s a great cover!

What a time to be alive. It’s confusing, confronting and bizarre, all at once. Things happen that we have never experienced before and as a perfect time capsule, I think The New York Times Magazine delivered the most valuable and meaningful designs. Week after week, an update about COVID-19, from all angles. 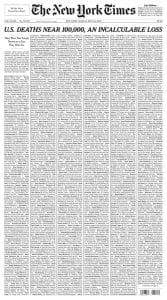 The creative highlight in this series was the cover starring artwork from ace Brian Rea (May 24, 2020). His fragile and “clumsy” line make this vulnerable, you just feel the oppressive isolation by looking at it. It was also impactful because this issue came together with that confronting front page of the newspaper. I think on that particular Sunday, these two publications complemented each other like I have never seen before. They made each other stronger, unforgettable with impact.

The front page stated not only 1,000 names of people who died of Covid-19, but also a small personal note of each person. It was exactly that extra information that turned it into something shivering. “They were not simply names on a list. They were us.” 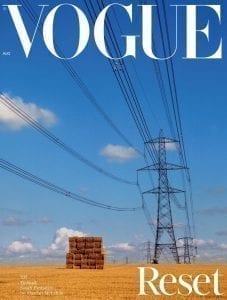 There’s no avoiding the main story of 2020, and magazines have made a great job of reflecting it. The pandemic had taken over our print and digital channels as well as our lives, and there are a host of great cover treatments about the disease and its effect on the lives of patients, medics and society in general. Just as the weeks have sped by, so have cover trends; from spiky sphere graphics to reportage of the COVID wards to key workers portrayed as heroes.

The New York Times Magazine series of COVID covers deserves a mention in any round-up, especially the “Who Lives? Who Dies?” design of May 4. That powerfully stark cover highlights a story of racial difference that unwittingly heralds the Black Lives Matter protests later that month. But of course, we expect such brilliance from Gail Bichler and team, so while acknowledging it I have instead looked elsewhere for something more of a surprise. 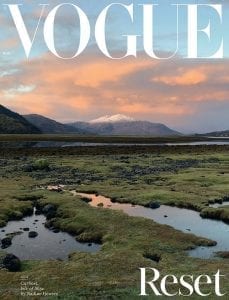 Magazine covers seem to have reached a stage of reflection, and the August issue of British Vogue is my favorite example of this. Thanks to travel and social distancing rules, the creative team have been unable to shoot a big fashion cover for several editions now. For the August cover, the magazine has collected nature-themed art from 14 British artists.

The resulting ‘Reset’ series is a gentle collection of beautiful covers that suit the mid-summer timing but also harken back to the early days illustrated covers of the magazine. Images include photography from Martin Parr and Alisdair McLellan, and art by David Hockney and Lubaina Himid.

Obviously the more usual fashion cover will return, but I hope a little of the innovation of these times remains in Vogue’s thinking as the magazine plans its new normal. 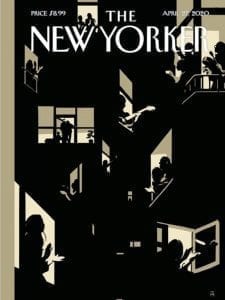 Residents of cities across the world have set aside time to celebrate the essential workers who are keeping society intact during the COVID-19 pandemic. The New Yorker’s April 27th cover depicts a daily ritual in New York City, when neighbors break the silence with applause and music at 7 p.m., daily. I’m drawn to this cover for its power to share a glimmer of hope and joy through simple silhouettes. 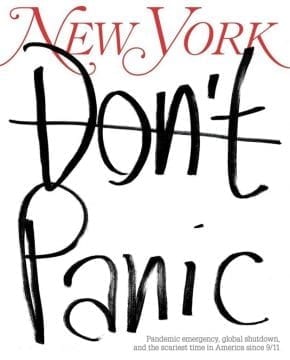 New York magazine never fails to articulate exactly the right sentiment at exactly the right moment. There is perhaps no better example of this than its March 15 “Don’t Panic” cover. It’s striking how something so simple can be so powerful, especially when viewing it with hindsight. Typically when you critique design it’s a pejorative to say something looks rushed, but in this case, it’s exactly what makes this cover so damn brilliant. The image is reflective of how fast the virus spread and how quickly we all needed to respond. It’s amazing to think that when this issue was published none of us had any inkling of how bad things were about to get. At the time there were a few clusters of COVID-19 in the country, but anxieties from public officials became quickly palpable when schools and public spaces began to close in parts of the Tri-State region and the Seattle metro area. New York clearly understood the stakes, and thus delivered a cover that defines the mood of this tragic year so succinctly, by simply just spelling it out with a Sharpie. This is iconic design that will stay with me for a long time.