The Ethics of Covering Heath Ledger
People, EW rush to get covers out; Bonnie Fuller rushes to judgment. 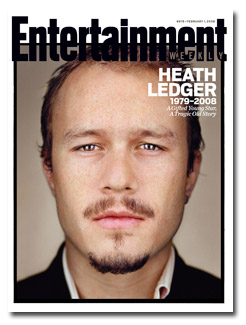 Heath Ledger’s death this week rocked New York, Hollywood (most of which seemed to be at Sundance) and the rest of the country, as well as Australia, where the actor was born. It rocked the celebrity magazine world too, working editors and production staffs into a deadline frenzy to beat the rush at the newsstand. People magazine was able to close with a Ledger cover while most of its newsstand competitors, which close Monday, did not; Entertainment Weekly, which closes on Tuesdays, managed to produce a Heath Ledger cover, too.

As Ad Age’s Nat Ives pointed out, the later close is going to benefit People in “the relentless checkout-lane war against Us Weekly, Star, OK, In Touch and Life & Style.” Undoubtedly true, but is checkout domination all these magazine publishers care about?

Maybe it’s because I identify more with Heath Ledger than other celebrities (he was 28, liked to party and altered his facial hair frequently). Maybe it’s because I’ve never bought a copy of People. But talk of a checkout-lane war in the wake of a death like this feels a bit tacky.

Particularly when the news of Ledger’s death was exhaustively—thoroughly and well, by the way—reported in real-time on the Web, more so than cable news coverage. (Don’t get me started about this guy. I mean, please.) Radar appeared to be the first to post the news; the New York Times’ City Room blog delivered continuous updates; and Gawker—which has the reputation of being tad insensitive in times like these—posted perhaps the most eerily poignant video of the scene, replete with natural audio (you ever hear a crowded New York street this quiet?) of the removal of the body.

And what does this say about magazine Web sites? Bonnie Fuller, editor-in-chief of Star magazine, chose to blog about Ledger’s death. Not for Star magazine, mind you—for the Huffington Post. And a wildly speculative post at that:

None of his gifts, neither talent nor family, appears to have been enough to combat the demons that apparently led Heath to take the pills that could have ended his young life.

Heath, perhaps if you had just re-watched your old film you would have been inspired to stay with us and to have "changed your stars."

For more coverage of Heath’s life and tragic death, go to Starmagazine.com.

Bonnie, perhaps you should’ve considered if anyone cared what your Netflix queue looks like. Or waited, like everyone else, for an autopsy. And maybe a fact or two, while you’re at it.

Speaking of tacky, look at the “tags” used by HuffPo for their Heath coverage:

That’s right. They’re tagging their stories with misspelled variations—and rumored causes of death—on purpose in order to boost their traffic with people who type “Keith Ledger” into search engines.