Essence Denies Toxic Workplace Allegations, Names Interim CEO
The magazine issued a forceful denial to allegations made in an anonymous letter, but later promised to undergo an investigation. 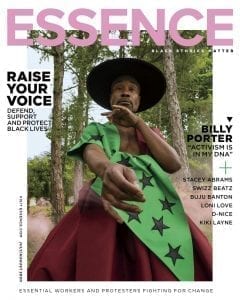 Note: This story originally stated that Richelieu Dennis had been serving as interim CEO of Essence. The magazine says he never officially held that role, but had only “assumed temporary leadership” after its previous CEO stepped down in March.

As it marks its 50th anniversary this month amid a multi-weekend, virtual edition of its annual music and culture festival, Essence finds itself on the defensive, refuting allegations of a toxic work environment but announcing a new interim CEO as the magazine undergoes an external investigation.

On Sunday, an anonymous letter titled, “The Truth About Essence,” purportedly written by current and/or former staffers who said they withheld their identities for fear of retaliation, accused owner Richelieu Dennis and other senior executives of fostering an “extremely unhealthy work culture” at the publication, which they said upheld a “longstanding pattern of gross mistreatment and abuse of its Black female employees,” which make up over 80% of Essence‘s workforce.

Essence has denied the allegations outright, calling them “unfounded attempts to discredit our brand and assassinate personal character,” but on Tuesday evening announced that it was in the process of hiring third parties to conduct a review of its policies and “comprehensive” interviews of its employees, steps the company said it was taking “out of an abundance of caution and an unwavering commitment to transparency.”

Further, Essence said that the company’s newly hired chief growth officer, Caroline Wanga, who started on Monday, will be stepping in as interim CEO to ensure a “fair and independent” investigation. A former VP of human resources and chief culture, diversity and inclusion officer at Target Corp., Wanga takes over for Dennis, who himself had assumed temporary leadership of the company since Michelle Ebanks stepped down and joined the board of directors in March.

“The testimonies on Twitter and Instagram by a mighty chorus of brave Black women uncovered the racial bias and discrimination in America’s white-owned mass media organizations. This led to resignations followed by recent corporate promises to do better,” the anonymous letter stated. “But Black women at Essence have been forced to remain silent. We fear cannibalizing the public narrative for Black Lives Matter and civil rights 2.0. We also fear losing our jobs or being banished from Black cultural spaces.”

The letter detailed a litany of alleged transgressions by management, including “tactical bullying” and “malignant and histrionic leadership” on the part of former CEO and current board member Michelle Ebanks as well as an alleged pattern of sexual harassment by Dennis, who acquired Essence from Time Inc. two years ago in a deal that restored majority Black ownership at the magazine for the first time in more than a decade.

Further, the letter noted that staffers had little incentive to share grievances or frustrations with the company’s HR department, which until Wanga’s arrival this week, was run by Martha Dennis, Richelieu Dennis’s wife.

The letter also called for major partners to pull advertising from the publication until it’s under new leadership, demanded the immediate resignations of Dennis and Ebanks as well as chief content officer Moana Luu and COO Joy Profet, and gave Essence‘s leadership five business days to respond.

It turns out they needed just one.

In a lengthy statement Monday, Essence issued a blanket denial of the allegations in the open letter, calling them “false” and “defamatory” and pledging that the magazine will not be “succumbing to a cancel culture.”

“Facts will always matter, and we are not afraid of the truth,” Essence said in the statement. “The allegations and mischaracterizations throughout—whether of pay inequity, intimidation, and otherwise—are unfounded attempts to discredit our brand and assassinate personal character.”

Essence also specifically denied the allegations of sexual misconduct, which it says were “recklessly and untruthfully thrown about” despite a lack of “any evidence of such defamatory accusations.”

“In fact, there have been multiple comprehensive reviews of the HR function, and no evidence has been found to substantiate these anonymous claims,” Essence said in the statement. “We have and will continue to review any legitimate claims of any nature that come to our attention.”

The statement did not mention who, specifically, conducted these multiple comprehensive reviews—a notable question, given what the anonymous letter called “a blatant conflict of interest” in Essence‘s HR department.

“As we close, our message is simple—the accusations are false and we fully deny them,” the statement concluded. “We are not succumbing to a cancel culture. We are not going to defame anyone. We are not meeting hurt with hurt. We know there is a lot of pain and a lot of healing that needs to happen in our communities, but we don’t have to destroy each other to heal.”

After the anonymous letter was published Sunday, Sydney Scott, a former assistant editor who worked at Essence under both Time Inc. and Richelieu Dennis, shared some of her own experiences at the magazine, adding that she felt the response from Essence was “not enough.”

“I just want to be clear, that this is not an attack on Essence,” Scott wrote on Twitter Monday evening. “I grew up with this publication and I believe it has an incredibly bright future ahead. The women there are incredibly smart, amazing people who I’ve learned so much from. But I feel the company’s toxic environment makes it difficult for staffers to thrive. I truly hope that executives at Essence will consider the feedback they’ve received from past and present employees and find a way to implement the changes needed.”

Prior to Tuesday’s announcement of the interim CEO and the external investigation, a follow-up statement from Essence had taken on a different tone, though it didn’t reference any of the allegations specifically.

“It is extremely important that we foster a safe, transparent and respectful workplace for everyone and we believe that truth and clarity are foremost,” read the subsequent statement, posted on social media Tuesday afternoon. “We will continue to do the work to be better every day and come together as an organization for each other and for Black women globally to build together, change together, and rise together.”

Following yesterday’s claims made by @takebackessence, I want to share my experience working at @Essence. pic.twitter.com/v1rgq47AhY