Essence Cancels 2020 Festival Over Public Health Concerns
Organizers set aside earlier plans to postpone the July event for the fall, based on guidance from local authorities in New Orleans. 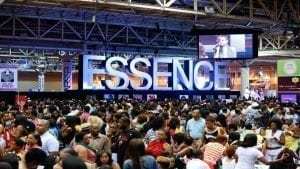 Essence has canceled its annual music and culture festival amid concerns about the spread of COVID-19, the magazine announced Wednesday, setting aside earlier plans to postpone the July 4th weekend event for the fall.

Organizers initially announced on March 27 that alternate dates later in the year were being explored and that headliners such as Bruno Mars and Janet Jackson would still be appearing. This week’s decision to instead cancel the event entirely, Essence said, was based on guidance from Mayor LaToya Cantrell, who recommended Tuesday that no large gatherings take place in New Orleans for the rest of the year.

Held annually in New Orleans since 1995—apart from the 2006 edition, which was moved to Houston in the aftermath of Hurricane Katrina—the multi-day festival has grown to form a massive business for the bimonthly magazine, attracting half-a-million attendees and infusing hundreds of millions of dollars into the local economy each summer.

“While we initially hoped that a reschedule from our July 2020 dates to later in the fall would be feasible, current information and projections by public health officials and agencies have made it increasingly clear that any large-scale events this year could potentially and unnecessarily put attendees and surrounding communities at risk,” Essence said in a statement issued Wednesday.

New Orleans has emerged as an epicenter of the COVID-19 pandemic in the United States; some health experts have attributed the acceleration of the spread in part to the city’s Mardi Gras celebrations in late February.

“What would have typically been a very difficult decision for us was not because people come first,” the statement continued. “We will continue to do everything that we can to serve our community during this time.”

Essence said that previously purchased tickets—$186 for a general admission pass—will be honored when the festival returns to New Orleans in 2021, but that attendees also have the option of obtaining a full refund through Ticketmaster.

In the meantime, organizers are planning a “virtual edition” festival, taking place July 4th weekend and hosted on Essence Studios, the magazine’s newly launched SVOD platform, which it said will also function as a “benefit celebration in honor and support of the City of New Orleans, which has been an incredible partner over the festival’s 26 years and continues to be especially hard hit during this crisis.”

“We greatly appreciate the Essence family for working with the City of New Orleans and Louisiana as we face this ongoing public health crisis,” said Louisiana Governor John Bel Edwards in a statement. “We have enjoyed a long-standing relationship with the Essence family and look forward to continuing the celebration in 2021.”