Esquire made big news in the world of paid Web content in July, putting one of its magazine features behind a paywall. “The Prophet”—for sale on Esquire.com for $1.99—wasn’t the title’s first experience with a paywall though.

Esquire has been testing paid content models for ebooks and anthologies since last year. More recently, they’d solicited more than 100 stories for a similar project with the charity Narrative 4.

Tyler Cabot, articles editor for Esquire, has been behind each of the recent paywall initiatives. He admits they’re still very much in the experimentation stages, but they’re learning about models, distribution and security with each step.

FOLIO: What’s the background of the project? Why this story? Why right now?

Tyler Cabot: I’d been working on other ways of monetizing content, and a lot of that began with fiction. We got frustrated a few years ago with putting fiction stories up for free—it seemed there was a market there. So a little over a year ago, we did our first ebook. Three or four months later we did another fiction collection and a few anthologies of older material. So this was an evolution.

It was in that way of thinking that I began this thing with Narrative 4. We had about 106 stories, put about 15 in the magazine and asked what we do with the rest. The initial thought was that we could do an ebook, but I wanted to experiment a little more and make it feel like it was living on and easier to access. One of the problems I’ve had with ebooks is that they come out and everyone’s really excited and then they vanish. That’s when I started exploring if there were ways to make this into a paid website.

FOLIO: The ebooks, anthologies and the project with Narrative 4 are all behind some sort of paywall, but they use different models than the one you’ve used for “The Prophet.” How did you settle on this particular model?

Cabot: This is somewhat similar to the Narrative 4 one, just because it is still a pretty basic paywall. At this point though, we’re experimenting so we want to try as many different ways of doing things as possible. We wanted to see if there was a way to have this actually be living on our website. That seemed like a pretty big plus to us. We’ve done the ebook thing, let’s try a different way of doing things and then we can have an even bigger set of data to see how this works. 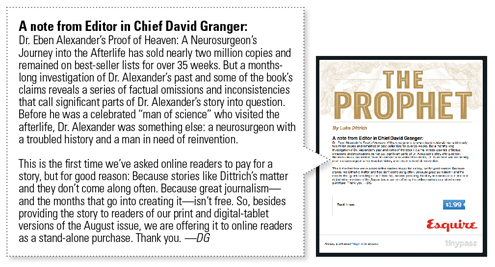 FOLIO: How successful has it been so far?

Cabot: We’re still tallying all that stuff up, but I can tell you that our conversion rate is up to 5 percent. It’s still selling. And somewhere around 42 percent of people who start purchasing it, end up finishing [the purchase process].

FOLIO: One of the big arguments against paywalls is that they hinder social sharing. What was the net impact of the article on social media?

There was a lot on social media, a ton on Twitter and so on. A lot of people were linking to The Atlantic [Wire] article about our article though [“The ‘Proof of Heaven’ Author Has Now Been Thoroughly Debunked by Science” | 7.2.13].

One thing we did to help [mitigate that impact] was to partner with Longreads and with Matter. They both have big sets of subscribers and they said it was a piece that their subscribers would love, so they wanted to make a deal. It seemed to us to make sense to do that—to sell it in bulk. But also, there are a lot more readers there who are going to be talking about it.

FOLIO: Do you have any other unique distribution strategies you’re pursuing?

Cabot: One of the cool things both those places do is that [the article] is automatically sent to your Kindle or iPad device. That’s something I’m very interested in—how you can maximize the number of places that you can read it.

FOLIO: A few critics have noted that the paywall itself is pretty easy to bypass. Is that something you were aware of?

Cabot: It was intentional in the sense that this was a total experiment. Tinypass [Tinypass provides the paywall in front of “The Prophet”] offers a more secure paywall, but it’s much harder to implement. We had no idea how this was going to go, so we said, ‘Let’s just do it and we’ll see how it goes.’ As we go forward, we may want to use the more secure one, or we may think this is great.

If you start this and have no idea how it’s going to go, the biggest priority isn’t building the biggest holding box you can. It’s to get it done, see how it works and then you can invest more time and more money.

FOLIO: Are you planning on doing this again?

Cabot: We don’t have a plan right now, but I would say probably. We have to figure out the right story to do it again with. It could be a new story or we could do it with some old stories. The main thing to keep in mind was that this really was a complete experiment and it still is. It’s very much a living experiment. We’re just kind of rolling with it, pushing forward with it and learning as much as we can.