East Bay Express Publisher Resigns Over N-Word
Stephen Buel says he intends to sell the 30-year-old alt-weekly and its parent company after apologizing for using the slur in a staff meeting. 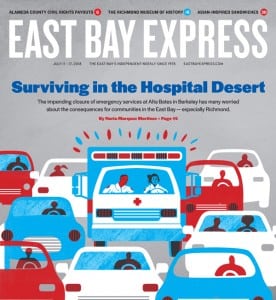 Stephen Buel will step down as publisher of the Oakland-based alt-weekly East Bay Express and sell its parent company following a “brief transition period,” he announced this week after apologizing for using a racial slur in a June staff meeting.

“You know, if a rapper puts it in his lyrics, it’s free game for anyone to say [the N-word],” Rasilla quotes Buel as saying in the meeting.

Rasilla says Buel later apologized for removing the articles in question without consulting her or Bitker, but not for his choice of words in the meeting. Rasilla resigned in protest, as did calendar editor Beatrice Kilat.

“While referring to hateful words subsequently reclaimed by the communities they once oppressed, I said a couple of those words aloud,” wrote Buel in a post on the East Bay Express website Friday evening. “I should not have done so and am extremely sorry that my remark caused others pain.”

The same evening, Richards—who has served as the weekly’s editor-in-chief since last August—announced plans to resign at the end of the month. Buel followed up a day later by announcing his own resignation as publisher of Telegraph Media—parent company of the East Bay Express as well as Oakland Magazine, Alameda Magazine, The East Bay Monthly, and the dog-focused newspaper BayWoof—naming a longtime colleague, business development director and former editor Robert Gammon, as his successor and revealing plans to sell the Express.

This prompted a reversal from Richards, who tweeted Monday evening, “In light of Steve’s resignation as publisher and plans to sell the paper, and with support from the staff, I have decided to remain as editor of the [East Bay Express]. Also, happy to announce I will be acting with full autonomy.”

Buel, who served as editor of the East Bay Express from 2001 to 2010, was part of a group of investors who acquired the title from Village Voice Media in 2007, along with his wife, Judy Gallman, who serves as editor of East Bay Monthly, Oakland, Alameda, and Bay Woof. Buel and Gallman formed Telegraph Media after becoming majority owners of the publications last July.

Now, all five titles are up for sale, Buel tells Folio:, adding that he hopes to sell them all in one piece and that both he and Gallman intend to leave the company.

“I made a couple mistakes in the past month, and another one a decade ago, but the universe doesn’t seem to believe in forgiveness at the moment,” added Buel in a written statement provided to Folio:. “So I stepped down because that seemed like the best way to safeguard our company’s journalism and jobs.”

The mistake “a decade ago” is an apparent reference to the allegation brought by former Express publisher Jody Colley that Buel had inappropriately kissed her at a work event. Colley claims she was laid off last July, after a decade on the job, once Buel became the company’s managing owner.

“Mr. Buel inappropriately kissed me at a work event,” Colley wrote in a comment on Buel’s apology post. “Though he was written up for the conduct, he never owned his actions, at least not at the time. I didn’t know that was sexual assault.”

“In 2008, at the end of a successful Best Of the East Bay Party that she staged, I gave Jody Colley an inappropriate congratulatory kiss,” Buel replied in a subsequent comment. “I immediately realized the error of my ways and apologized.”