The 2016 Folio: Fulfillment Services Bureau Survey depicts an industry that, despite remaining more or less stable since last year, continues to see growth in new and non-traditional products and services.

While certainly not intended to provide a complete examination of the industry as a whole, Folio:’s annual fulfillment services bureau survey does provide a reliable snapshot of its continuing evolution.

Especially when examining those companies who, over the last several years, have repeat- edly provided data on the clients they serve and the services they provide, distinct trends begin to emerge. In particular, the industry appears to be in a state of consolidation. The typical fulfillment bureau services more than twice as many titles as they did in 2010—and nearly twice as many records.

The types of services provided are changing, too. Non-magazine titles make up a larger percentage of clients than ever before, and even though most fulfillment bureaus aren’t abandoning en masse the traditional services they’ve offered for decades, many are expanding their existing services that account for modern needs in areas like data management and digital marketing.

“Data and marketing have proven to be the drivers of CDS Global’s technology,” said Malcolm Netburn, chairman and CEO. “CDS Global now provides integrated marketing intelligence and support with database, a single view of the consumer, marketing automation tools, and business-intelligence-driven marketing programs.” 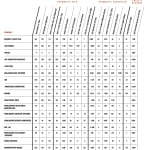 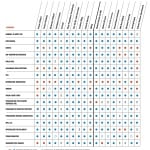 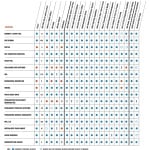 Before even looking at the data itself, the number of individual respondents to our annual survey has seen a steady drop-off. Thirty-two companies participated in the 2010 survey, 29 in 2014, and just 17 this year.

But it’s not just a reduced number of participants that indicates consolidation; fulfillment bureaus are, on average, bigger now than they were five years ago in almost every measurable way. In 2010, the average fulfillment provider surveyed had 144 different titles as clients. That number has since ballooned to an average of 367 titles in 2016, a 155 percent increase.

The number of records possessed by these companies has also increased. A typical respondent, who serviced 9 million records in 2010, now services an average of 17.3 million records—a 92 percent increase.

On February 10, the day after the 2016 survey closed, Omeda Communications announced publicly that it had acquired Sunbelt Fulfillment Services and all of its clients from company founder David Ely.

Omeda president and CEO Aaron Oberman said the move was part of a strategic effort to expand its clients in the consumer space, who by and large were asking for more data-oriented solutions.

“Monetizing data is a need that all media companies have, regardless of whether they are consumer or B2B,” Oberman says.

While year-over-year changes in the types of services offered by fulfillment bureaus is generally minimal, a few aspects of the data stand out.

Fulfillment bureaus are providing a higher percentage of their clients than ever before with digital- and data-oriented services like email alerts for digital editions and e-mail newsletter list management.

Other services offered in-house by fewer participants than last year include installment billing, outbound telephone sales/renewals, alternate delivery, and palletization, all services traditionally associated with a print business that, although still vital, bears less impact on most publishers’ bottom lines with each passing year.

In a new aspect to the survey, Folio: asked participants to identify the new services they were providing. Sixteen of the 17 respondents (94 percent) identified data reporting as a new offering, while 15 identified real-time offer capability.

E-mail marketing and web content creation were the most commonly cited third-party services that are in the highest demand. Sixty-five percent of companies surveyed say they provide personalized web content experiences based on subscriber profiles, and another 18 percent say they contract that service out.

The types of publishers that fulfillment providers serve are changing too. While non-magazine titles made up just a quarter of the business five years ago, they now account for more than a third of all clients—38 percent.

When asked to identify the biggest trends in their businesses over the last one to two years, most respondents reported a continued shift toward ancillary or non-traditional revenue streams in data, digital, events, and marketing automation.

More than three-quarters (76 percent) of companies surveyed say they already provide marketing automation services, while anoth- er six percent say they will begin providing it in-house within the next year.

One fulfillment provider summed it up by saying, “Publishers are continuing to test new ways to exploit the digital landscape.”

As the services in demand from publishers continue to diversify and more providers naturally begin to enter increasingly-overlapping spaces, the ability to offer a wide range of services as a single provider becomes an attractive trait.

“Now publishers are dealing with a daunting number of suppliers, like having a different lock for each door and a huge key ring,” says Diane Cuellar, president and CEO of Cambey & West. “They are looking for a ‘master point person,’ one company which can coordinate the various services and be sure there is no redundancy or missing links.”

When met with a request from clients for new services that aren’t part of a fulfillment provider’s core competencies, respondents are split between being more likely to develop them in-house (41 percent) or to integrate third-party technology (35 percent). Another 26 percent said their response is likely to vary depending on the circumstances.

“We are constantly developing new technologies that fit within our platform of audience management,” says Subscription Genius president Joel Pape. “We often integrate with digital providers and use existing tools to complement and integrate where needed, as well.”

As it is, an overwhelming majority (88 percent) of respondents say they already partner with other third-party providers to offer expanded services.

Starting in 2015, Folio: added a client-side element to the annual fulfillment bureau survey. Now in its second year, the publisher client insights portion of the survey allowed us to hear what more than 100 publishers are thinking when it comes to their fulfillment needs.

While the fact that half of all respondents surveyed claim to have been with their current fulfillment provider for more than six years is perhaps an indication of a slow rate of client turnover in the industry, a full third of respondents say they’ve been with their current provider for three years or less. Only about a quarter (23 percent) say they’re currently shopping around for a new vendor solution, but that number could soon be on the rise, the same portion of publishers who said they were shopping around last year.

Interestingly, the length of the publisher-fulfillment bureau relationship seems to have little effect on satisfaction with services. Thirty-six percent of publishers who had been with their current provider for three years or less reported being somewhat or very unsatisfied with their vendor’s technology services, compared to 32 percent of those whose relationship went back three years or more.

Almost half of the publishers surveyed (49 percent) say they’re already having their fulfillment and data needs provided by more than one different vendor.

Compared to last year, when 58 percent of publishers said they used only one vendor for all of their fulfillment needs, the data couldindicate that more publishers are experimenting with different providers for different services.

As publishers continue to seek new solutions and revenue streams like customized data offerings, too, consumer-facing and association publishers appear to be catching up to B2B media companies in their willingness to use multiple fulfillment providers.

According to the publishers surveyed, cost-effectiveness and customer service are, predictably, the most important attributes in a vendor—some things never change. Following closely behind, however, are vendor stability, satisfaction with system requirements, and technology, a clear indication that publishers want more out of fulfillment providers than the services they’ve traditionally provided. Traits or services commonly cited as unimportant by publishers include system demonstration and reference checks.

Indeed, publishers seek a wider variety of solutions than ever before. More than two- thirds (68 percent) said they’re using their fulfillment provider for email marketing, and just under half (49 percent and 43 percent) say their fulfillment partner provides audience data tracking and digital publishing solutions, respectively.

Nearly a third each are exploring ecommerce and digital marketing solutions with their fulfillment providers, and 22 percent are pursuing digital entitlements. Despite the widespread recognition of the importance of data integration into the publishing busi

This indicates that fulfillment bureaus could potentially have a wide pool of potential clients who already come to them for fulfillment but seek data services elsewhere.

“We have the capabilities to manage that data within a client’s overarching operational database, giving a complete 360-degree view of a customer” adds Oberman, Omeda CEO, who says he thinks of his company as a data and fulfillment services provider, not just the latter.

Notable in light of the aforementioned one-third of publishers who say they’re unsatisfied with their fulfillment provider’s reporting capabilities, more than one-fifth (21 percent) of publishers say their vendor does not offer customized reports—down from 28 percent a year ago—and more than a quarter (28 percent) say their vendor does not offer real-time access and updates to the data—down from 36 percent last year.