Did Shaq Find Out He Got Traded via Twitter?
NBA star Tweets he didn’t know about trade, but don’t let Shaqtus fool you. 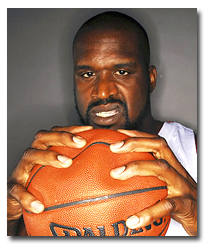 O’Neal, one of the most followed celebrities on Twitter (current follower count: 1.4 million), responded via tweets early this morning that he was unaware of the trade, which promptly send Twitterville and those who monitor it into a (sorry) twizzy.

Here’s a recap via TechCrunch:

Look at Shaq’s last few tweets. Several minutes ago he tweeted out  “I didn’t hear dat yet” in response to this tweet , “is it true u a CLEVELAND CAVALIER.” A few minutes later someone sent Shaq the following tweet, “U CLEVELAND BOUND…shaq found out he was traded thru twitter! lmao….hahahaaaaaa” Shaq’s response? “I kno right.”

Sure, this makes for a funny anecdote to add to Twitter’s growing lore, but let’s take a Shaq-sized (foot size=23) step back here.

Do you really think the Phoenix Suns and Cleveland Cavaliers did not discuss the finalizing of this trade—rumored for over a week—with O’Neal? After all, Cleveland is giving up two players, a second round draft choice and $500,000 in cash for a year’s worth O’Neal’s services (his contract is up after next season)—not to mention they’re paying his $21,000,000 annual salary. You really think Shaq wasn’t consulted on this deal?

This brings to mind a prescient coverline I saw recently (via PC Mag’s digital edition): Will Celebrities Kill Twitter?

It’s a question worth asking. While Twitter’s surge is no doubt more than in part due to celebrities embracing the social medium, they can also accelerate the rate of Twitter fatigue.

I will say this. Shaq is one of the few Twitter celebrities I follow who consistently responds to his followers, and embraces the quasi-personal connection that makes Twitter cool.

If celebrities do kill Twitter, Shaq won’t be the one holding the smoking gun.

Check Ashton and Oprah for that.