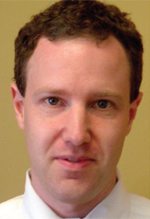 Blank has steadily encouraged RBI’s editors to adopt social media as a core strategy for serving their markets and building their careers.

Some of RBI’s most popular editors, columnists and bloggers were also among the biggest hold-outs when it came to incorporating social networking tools such as Twitter, LinkedIn and Facebook into their daily tasks. After already garnering a large following through their articles and blogs, some just didn’t see the point—until Dan Blank got a hold of them.

Through one-on-one conversations, weekly newsletters, formal workshops and internal Webinars, Blank has been working hard to encourage the company to broaden its view of social media and recognize how it could be integrated into each brand.  “It’s all about empowering people and empowering our brands through social media,” he says. “It’s about giving them the tools to move their careers forward by showing them how they can connect with more people. My goal is to get our editors and bloggers to put themselves online in meaningful way.”

Moving forward, he says, the company will work to integrate social media into core editorial and marketing strategies instead of just looking at it as a separate channel. “An example would be using LinkedIn to develop articles instead of just broadcasting messages,” Blank says. “So, if a team looks at their editorial calendar for the next three months and identifies a few key topics they are covering, they can now develop those conversations on LinkedIn and Twitter to shape the focus on articles, find sources and get quotes.”

As far as what’s ahead for social media, Blank says the magazine industry will see a lot more integration of it into business models and brands. “We don’t have control over these connections like we do with traditional broadcast messages, but it’s a way that we can engage with our audiences everyday,” he says. “There’s a lot more pressure to not just launch products, but to also be heavily involved with them. It’s interesting, in a way, to see how disruptive social media has been. It’s really forcing us to build our business models around it.”

VITAL STATS: As part of his responsibilities Blank manages RBI’s blog program, which consists of more than 200 blogs and 300 bloggers.