Cuts at The Atlantic Set Off Alarm Bells for the Industry
The disconnect between audience growth and sustainability, it seems, has never been wider.

Even as layoffs, pay cuts and indefinite furloughs become an almost daily occurrence in the media industry, news about such developments grows no less tragic and alarming.

Such was the case Thursday morning, when Atlantic Media chairman David Bradley revealed in a staff memo that, despite gaining 160,000 new subscribers since launching a metered paywall last September, 68 employees at The Atlantic would be informed by 11:00 a.m. that they’d lost their jobs.

The cuts, which represent 17% of the magazine’s approximately 400 staffers, were made necessary by a decline in advertising and “the overnight and near-complete undoing of in-person events,” Bradley said, while noting that those let go include sales and events staffers, but also writers, editors and those in marketing.

Advertising aside, the impact of a pause on in-person events on the magazine’s top line was certainly significant. In a normal year, The Atlantic produces more than 100 live events, which reportedly account for up to a quarter of its annual revenues and likely a larger share of its margins.

Formerly profitable, The Atlantic sank into the red last year, insiders told The Wall Street Journal, after embarking on an aggressive expansion that included hiring about 100 additional employees under new owner Laurene Powell Jobs, whose Emerson Collective acquired a majority stake in the magazine in July 2017, investing a reported $100 million. 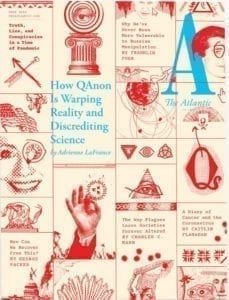 While providing 16 weeks of severance pay to dismissed staffers is admirable, observers were quick to contrast Thursday’s cuts at The Atlantic with the promise made at the end of March by another billionaire-owned institution of a magazine, Time, that it would not lay off any staff for at least 90 days.

I won’t delve into the ethics of that here, but in fairness to Powell Jobs, she’s under no obligation to run the business as a charity, and she’s conveyed from the outset that the magazine needs to be financially viable as Emerson Collective prepares to take on full ownership in the next few years. In any case, reliance on a billionaire benefactor is hardly a sustainable model.

Certainly much of the attrition the industry has seen in recent weeks would have happened regardless, albeit at a slower pace. Mass layoffs have been a painful side effect of evolving business models for years, and a global pandemic has prompted publishers to accelerate changes they eventually would have made anyway. Bradley acknowledged as much in his memo Thursday, noting that the positions being eliminated aren’t likely to come back after the pandemic subsides.

But it’s difficult to feel optimistic about the industry’s path forward—and even more importantly, its ability to attract the next generation of talent—when an organization flush with investment, that seemed to be doing everything right, adding nearly 100,000 $50- or $60-per-year subscriptions in 10 weeks, producing indispensable journalism that doubled previous records for monthly traffic, can’t avoid making large-scale cuts, which extended well beyond the events business and into the newsroom, two months into a temporary economic disruption.

What the pandemic has revealed is just how vulnerable the economic underpinnings and ancillary revenues propping up the news business have become. The disconnect between audience growth and sustainability, it seems, has never been wider.