Crain, ALM, McGraw-Hill Lead Pack Among ABM’s Neal Award Finalists
Of 700 entries, 124 make it to the final round of judging. 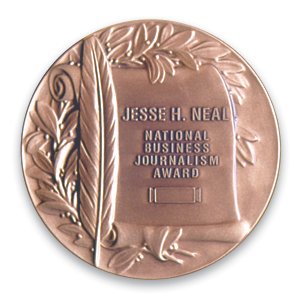 Trade media association American Business Media Tuesday morning released the finalists for this year’s iteration of its annual Jesse H. Neal awards. Of some 700 entries, 124 have made it to the final round, the group said.

Among them, McGraw-Hill drew the most finalist selections with 13. Following closely behind are Crain Communications and ALM, both with 12.

In the group with more then $7 million in gross advertising and circulation revenue, RBI, DTN and the Society for Human Resource Management made up the nominations in the Best Single Issue of a Magazine category. In the Best Single Issue of a Tabloid/Newspaper, Crain has two nominations this year and Northstar Travel Media, for its Travel Weekly publications, has one. BusinessWeek, Government Executive and IEEE Spectrum are among the nominations for Best Web Site.

In the same revenue group, Hanley Wood, Advanstar and ALM make up the nominations for Best Web Site.

ABM will hand out this year’s awards, including the Grand Neal award, at an awards luncheon scheduled for March 11 at the Mandarin Oriental in New York City.