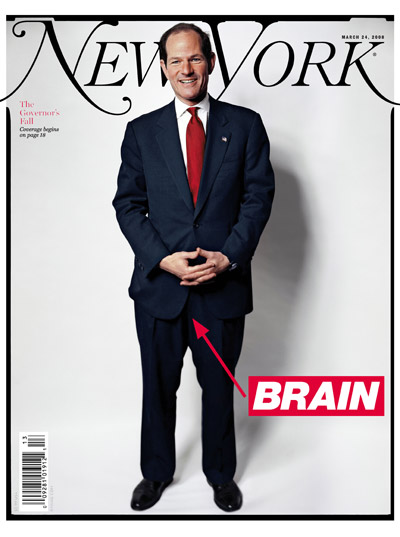 New York magazine is no stranger to controversial covers (see its Lindsay Lohan cover and accompanying, server-melting photo shoot a few weeks back). But when the story of New York governor Eliot Spitzer’s shocking involvement in a prostitution ring broke early (Monday) in the magazine’s print cycle (New York publishes on Mondays), it put the magazine in a tricky spot: it would be six days until it had its turn—six days of New York Post covers, blog posts, tabloid headlines and late-night joke fodder—to weigh in with a cover of its own. And it delivered a memorable, edgy one.

We asked some of our design friends to critique New York’s Spitzer cover. First up, Tim O’Brien, the illustrator behind the subject of our last cover critique—Rolling Stone’s Obama.

NAME: Tim O’Brien
TITLE: freelance illustrator; VP, the Society of Illustrators
CRITIQUE: The March 24th cover of New York Magazine is a funny and effective catharsis for the shocked New Yorkers. Swept into office with a wave of hope and enthusiasm, it was all undone by lust and hypocrisy. The cover image, an awkward shot of Spitzer shot from above making him look small is effective in shrinking a small man even smaller. Not knowing where to put his hands he forms a halo over his crotch; completely unintentional I’m sure but there it is. The use of white isolating his figure adds to the look, one that is reminiscent of the famous George Lois Esquire cover of Muhammad Ali pierced by arrows. The cherry on the top is a Barbara Kruger-esque sign and arrow that sends it over the top. Over the top is what this story is and the cover is perfect.

NAME: Anthony Ficke
TITLE: creative director, CAB Communications
CRITIQUE: Well, I must say I’m pretty open-minded when it comes to design, but to put it bluntly … this is pretty ballsy of a cover. The power created from this cover is that you were able to sum up an entire nation’s exact same thought with only one word! Nothing else needs to be said on the cover, yet you are compelled to read the story, if only to see what lines the author might have crossed. Most importantly, the goal of intriguing the reader has definitely been achieved. On another note, I really like that the New York logo breaks away from the edge to give a photo-negative feel.

NAME: Marco Turelli
TITLE: art director, Wine Enthusiast
CRITIQUE: Image and concept is brilliant! Will it sell magazines based on lack of cover lines and starkness of image? Who knows. Do I see it winning awards? Probably. Does Mr. Spitzer want to get away? You bet he does.

NAME: José Reyes
TITLE: creative director/Principal Metaleap Design
CRITIQUE: I appreciate how they showed a photo of Eliot in a way that was not disdainful, disrespectful  or shaming—that would be too easy. Instead, they showed how everyone knew him—for better or worse—which makes for a much more compelling cover. An argument for the internal battle of personal restraint and what we allow the world to see vs. what we are capable of doing and hiding from others seems to also be a subtle statement that the editors are making with the smiling Spitzer. If so, well done. The cover, in my opinion, is provocative, clear, succinct, humorous and timely—perfect.

What do you think? Drop me a line [dstableford AT red7media DOT com] or add your own critiques in the comments section below.