Everyone Loses When Business Infiltrates Editorial
Bending on integrity may keep the lights on, but at what cost?

Folio: hosted a CEO roundtable recently, the main subject of which was, as reported here, the “sacred, age-old barrier that once separated media companies’ editorial and sales teams.”

We can argue over whether in the magazine industry that barrier was ever sacred (I would win that argument, taking the position of, “You’re kidding, right?”) But what was noteworthy in Greg Dool’s fine coverage of the event was the room’s general consensus:

The firewall between church and state, he summarizes, “has all but disappeared in the age of branded content and marketing services—and that isn’t necessarily a bad thing.”

Well, yeah. Native advertising. Pay-for-play events. Custom edit packages. These have obviously changed the terms of engagement across the industry, and you’d be a fool to say otherwise. Some people want to build a wall and some want to demolish one—and they both have their reasons. But, hey, can we just focus on the second part for a moment? 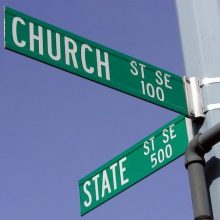 The sense of the room, Dool reports, was that “today’s business climate requires editors to work side-by-side with ad sales teams (and their clients) in order to meet new and evolving demands from marketers and offset declines in traditional advertising.”

Or, as one CEO put it, “The only way to truly protect editorial integrity is to have editors involved in the process.”

Hmm. I’m pretty sure the opposite is true. The only way to truly protect editorial integrity is to have editors nowhere near the ad-sales process. Having editors in the conversation guarantees only the gradual, or very rapid, erosion of their own editorial integrity—also known as “surrender.”

Now, don’t start howling or rolling your eyes. If the question is, “Does this guy not know what’s happening out there? Does he not know this is a matter of survival—his naïve idealism against our existential struggle?” the answer is of course he realizes. He’s realizing like crazy. Oh, how he realizes. But let us not bullshit one another, OK? Let’s ditch the empty rhetoric and doublespeak and just say it plainly. We are stuck in Donner Pass and we have to eat, no matter how repulsive the dining.

There. That wasn’t so hard, was it?  The truth shall set you free.

So if you’ll just acknowledge that “evolving demands from marketers” means “dropping any pretense of true editorial independence and letting the advertiser call just enough of the shots so you can still hold your food down,” we can more honestly assess where, if anywhere, to draw the line.

This process would include, for instance, ending the preposterous charade about disclosure. Dool reports that the execs agreed disclosure on pay-to-play event sponsorships should mirror the disclosures on native advertising and other sponsored content.

Ha. I guess they would agree. Because disclosure on print and digital native “content”—as nearly universally practiced—is designed to disclose nothing, but rather to adhere minimally to FTC regulations without actually telling readers what is afoot. Because when readers do detect advertising going on, they run for their lives. Come on.

“Sponsored content” means nothing. All content is sponsored, isn’t it?  And the design treatment that entirely duplicates ordinary editorial belies any claims of demarcation, doesn’t it? And we all know that, don’t we?

In a funny microcosm on their very practices, the media, agencies and brands are all the time using the word “clearly” when they really mean “opaquely” —as if mouthing the empty pieties somehow confers virtue.  It doesn’t. Ask Jim Bakker or Jimmy Swaggart.

So then, if you will agree to have a serious conversation about the elephant in the room, I will now dismount my high horse. Because, in this strange exercise of ritual dance, the CEOs did inadvertently brush up against insight.

One obvious truth came from an executive who wants no part of razing the firewall, because it is what guarantees audience trust of the editorial, and that trust is the goose that lays the golden egg.

“Over the long term,” this CEO insisted, “credibility is what’s paramount.”

Start carving slices out of the goose, in other words, and soon enough: no eggs.

Of course, CEOs are not known for much thinking about the long-term. So it was interesting to see that these bosses were contemplating not just their own revenue demands but the entire ecosystem. In particular, not just the “evolving demands” of the advertisers, but the evolving expectation of the readers.

Dool: “What has changed, everyone agreed, is the need to foster a two-way dialogue with readers, focusing on community building and viewing a media outlet as a connection point not only from advertiser to reader, but from reader to reader.”

If that’s true, if readers no longer see magazines as a broker of information and entertainment but a broker of relationships among the community formerly known as “the audience,” then maybe the ethical safeguards of the firewall become less important. This would require some serious suspension of disbelief on the part of readers, but as social media has made tragically plain, tribal connection trumps everything—including reality.  And last I checked, revenue-wise, Facebook is doing just fine.

So “not necessarily a bad thing?” For business, maybe not.