As Downtown Shuts Down, City Magazines Confront a Crisis
Four editors tell us how they're reorienting their strategies and serving readers in a time of disruption. 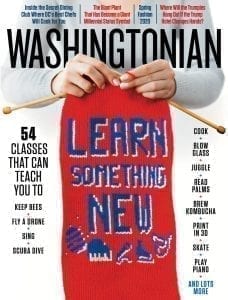 As the COVID-19 pandemic forces marketers to tighten their advertising budgets and organizers to cancel or postpone events, media companies of all sizes are scrambling to account for lost revenue.

In cities across the U.S., a virtual suspension of public life is taking a disastrous toll on alt-weeklies—many of which entered 2020 on unstable financial footing—but it’s also having an acute impact on the nation’s city and regional magazines, who devote much of their pages and resources to guiding readers toward experiences: things to get out and do, see or eat.

On Monday alone, Time Out Group announced it was suspending the print editions of each of its roughly 40 city-specific magazines worldwide, while San Diego Magazine laid off nearly its entire staff, apparently shutting down after more than 70 years as a result of the pandemic, reports the Voice of San Diego, though its owner says he hopes to restart operations after the crisis is over.

“After this has peaked, there will be plenty to report about if, when and how places are coming back,” says Margaret Seiler, managing editor at another city magazine, Portland Monthly. “But those activities that have ground to a halt include a lot of our advertisers, too. So while we’re pivoting to more immediate digital coverage and revamping plans for our sure-to-be-delayed next print issue, we’re also not sure we’ll all still be employed.”

Mike Schaffer, editor of the D.C.-based monthly Washingtonian, notes that while paid circulation and a diversity of advertisers has afforded the magazine some isolation from the financial issues faced by alt-weeklies, uncertainty remains.

“We’re heading into a really unprecedented economic environment,” he tells Folio:. “I don’t think anyone knows what the specific impact on media is going to be, but it’s very reasonable for people to be careful.”

In Dallas, D Magazine online editor Matt Goodman says his team first came to grips with the magnitude of the crisis and the impact it would have on the city about two weeks ago.

“[Editor-in-chief] Tim Rogers came into work basically yelling about a fire that nobody else could see, saying that we needed to be thinking about this,” says Goodman. “By Tuesday, I think everyone realized that this was going to be pretty disruptive.”

[Update: One day after this article was published, D Magazine announced that it had laid off 15 employees and implemented salary cuts for the remaining 67.]

In the early going, much of D Magazine‘s coverage, says Goodman, consisted of updates about what was happening, what was closing, what was being cancelled, before transitioning last week into service.

“You’re stuck inside, so what the hell do you do?” he says. “We’re talking to local bartenders and wine shops about stocking your bar, local grocers about stocking your pantry, coming up with ways to cook things at home that you’d generally go out to eat. Basically, just helping our readers acclimate to this new reality.”

“It would be tone-deaf not to shift our focus right now, but we’ve found there are plenty of ways for us to provide coverage in keeping with our core mission,” she says.

Just because readers aren’t looking up restaurant reviews, for example, doesn’t mean there aren’t plenty of stories to tell on the food and drink beat. Similarly, while travel is no longer an option for many, there’s an increased interest in local hikes and other ways to get out while still honoring the parameters of social distancing.

“I really wanted to be super robust in our coverage,” says Washingtonian‘s Schaffer. “As a magazine, we often stay away from things that lots of other people are writing about unless we have a unique scoop or perspective, and I really wanted to get beyond that mindset and just help our readers make sense of this and live their best lives here. All of our editors kind of gravitate toward their own interests and expertise, and everyone jumped straight into their stuff. It was a beautiful thing to behold, watching my colleagues work so hard and so fast.”

“We don’t want to just repeat what the Dallas Morning News is doing,” adds Goodman. “They have a lot more resources than we do, so we’re trying to get into the story a little bit more, finding things that keep people aware but also show what’s going on behind the scenes, which is kind of a moving target.”

At Portland Monthly, Seiler points to “stories unfolding behind the hard breaking news,” saying her team is focused on shedding light on some of the needs the shutdown has created and following Fred Rogers’ famous advice to “look for the helpers” in times of crisis, something Schaffer says Washingtonian is focused on as well, highlighting local heroes and the ways people can help others. 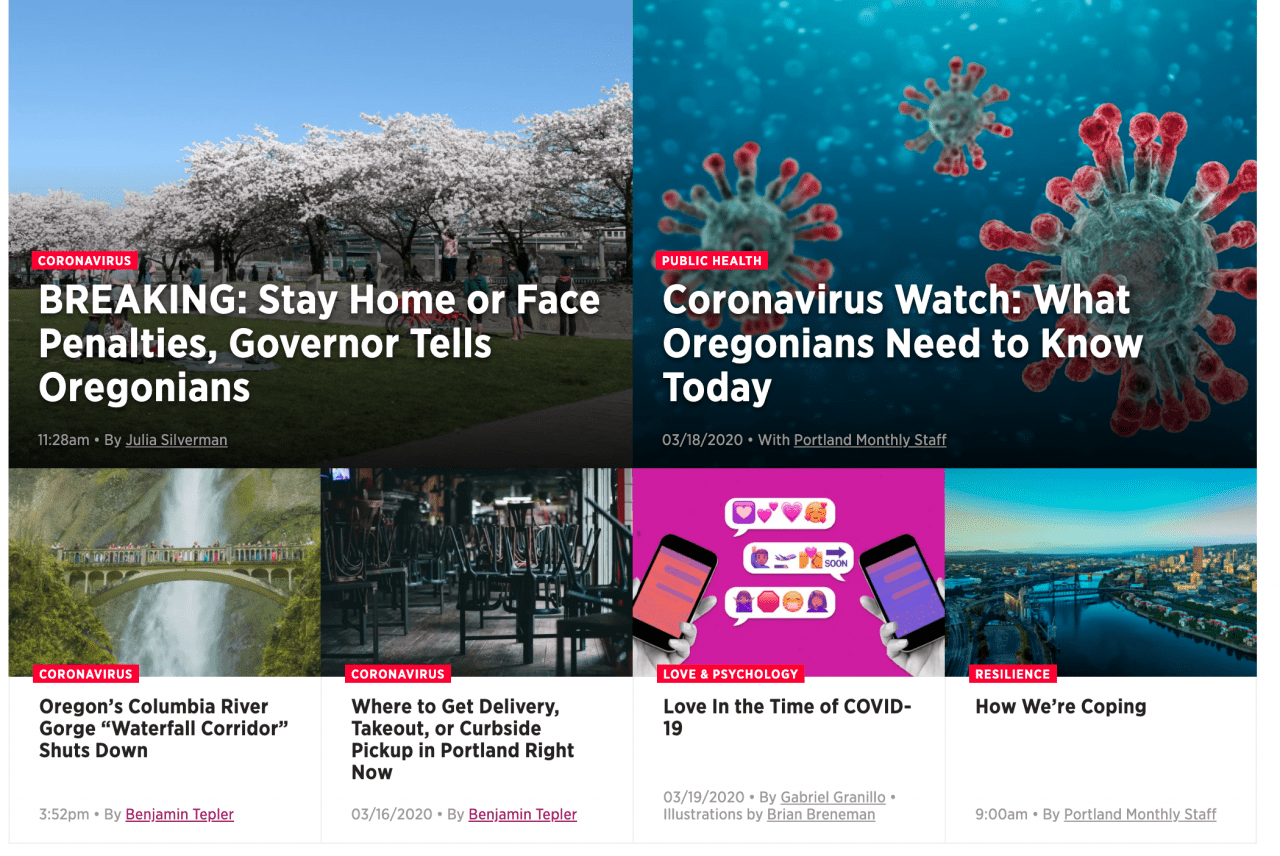 From the homepage of Portland Monthly.

“We don’t know what things will look like a few days out, let alone two months from now,” Seiler says, “but we can still report on how the changing situation is affecting the communities and local businesses we usually cover.”

“We’re trying to respond as circumstances change,” adds Boston Magazine‘s Weidenfeld. “Right now, we’ve been able to report on those industries as they respond to the challenges, and I have a feeling we’ll keep finding stories to tell in those areas—the chef who starts doing live cooking classes on Instagram, the bride who has a virtual wedding, that kind of thing. But we’re also trying to be flexible and allocate resources where it makes the most sense.”

The most popular stories on the site, though, have been those that provide practical advice, she says, such as information about where to get tested.

“We’re trying to remain agile and responsive to reader feedback, but the main thing we’ve seen so far is that people are, unsurprisingly, very focused on clear, concise information about what’s going on and what to do as the pandemic unfolds,” she says.

Seiler says the biggest question from Portland Monthly‘s readers is simply, “What now?” Readers want to know what restaurants are doing takeout, what’s happening to closed businesses, what resources are available for people who have been laid off. Most of that requires new reporting, she says, but content addressing other topics, like ways for parents to keep their kids entertained at home, can be mined from the magazine’s archives.

D Magazine in particular took a strong editorial stance early on, urging readers to avoid group settings more than a week ago, before local authorities did. Goodman says he’s been texting Mark Casanova, president of the Dallas County Medical Society, on a daily basis, trying to relay to readers the same advice that medical experts would be delivering to their patients. 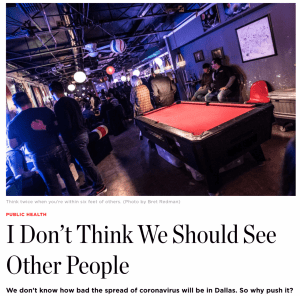 “We take pride at D in being able to have an editorial voice and advocate for things that we’ve reported about and believe we have an educated opinion on,” Goodman says. “I thought it was very important to take a stand and say, look, don’t go out to Deep Ellum. Don’t do these things, because it’s just not worth the risk. This is out there and people need to be firmly told in any way that we can.”

For many, the abrupt pivot in focus has also meant shelving other priorities for the time being. A “Best Brunch” package that D Magazine‘s online dining editor, Rosin Saez, worked on for months “doesn’t make sense to publish now from a logistical or moral standpoint,” Goodman says.

Instead, virtually every story the has posted over the past two weeks has been related to the pandemic. Goodman says it’s too early to be thinking about offering readers a mental break from the news; readers are hungry for content that helps them navigate the crisis and the disruption it’s caused.

“We’re thinking about how our already-planned stories will fit or not fit, if they’ll be irrelevant or seem tone-deaf,” adds Portland Monthly‘s Seiler. “We’re scrapping or delaying the things we can’t report right now.”

Of course, all of this is happening as staffers and editorial teams themselves are facing the same disruptions as their readers, and coordinating editorial coverage and producing print magazines while everyone is working remotely is no simple task.

Slack channels and other tools like Google Docs or Microsoft Teams are seeing heavier use, and all four magazines have implemented daily editorial meetings to make sure everyone is accounted for and on the same page.

Using video calls to maintain face-to-face contact like this isn’t just about having fun, but about maintaining a semblance of normalcy and camaraderie in a difficult time. Seiler says a morning conference call provides the Portland Monthly team not just with a chance for staffers to share what they’re working on and what they might need help with, but also to see what digital editor Gabriel Granillo’s cat is up to, or what “nerd T-shirt” editor-in-chief Marty Patail is wearing. At Boston Magazine, Weidenfeld says video meetings have “given us all a chance to get to know each other’s stylish work from home wardrobes and meet each other’s pets.”

While there’s still some novelty to this unprecedented arrangement, Schaffer remains concerned about the long-term impact of such isolation as time goes on.

“I worry about cohesion and people’s mental health, not just in our office but everywhere,” he says. “I think any media responds to a crisis with a bolt of adrenaline, but this seems like a marathon.”

There’s even more uncertainty on the print side, where issues are typically produced weeks in advance, by multiple people in the same room, passing edits back and forth, and the agility afforded by digital publishing simply doesn’t exist. Washingtonian is moving forward with a May issue, but Schaffer says that as of now, he has no idea what the page count is going to be.

“I’m exhausted, I’m tired, I’m stressed, as we all are,” he says. “And I sort of feel like, if you’re going to be exhausted and tired and stressed, you may as well feel that way in the service of doing something excellent. It’s tough. It’s going to be tough to make a magazine when people aren’t sitting around together, but we’re doing the best we can.”

“Print is going to have a hell of a time with this,” Goodman adds. “They publish six weeks out, and so much of this is changing within an hour to hour basis. That’s going to be the real challenge for city magazines, how do you explore this without being completely out of date? I don’t know if that’s a question that we’ve answered yet.”