BuzzFeed Tops List of Social-Sharing News Sites
Survey shows news sharing jump across the board for all media publishers.

Media publishing companies have increased interactivity between their content and consumers on social-networking sites in droves year-over-year, according to a new data survey conducted by NewsWhip.

The list, comparing social interaction with media content over the last year, illustrates an explosive increase the amount of social sharing for online publishers across the board. In Sept. 2012, NewsWhip measured 44.28 million total Facebook interactions—likes, shares and comments. That number skyrocketed 165 percent in less than 12 months to 117.5 million by Aug. 2013. 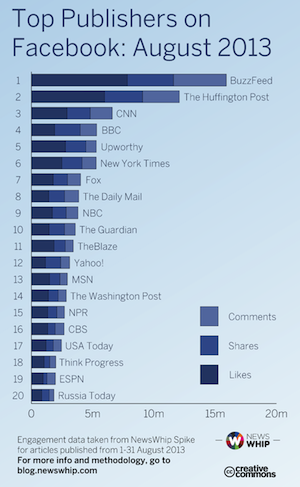 The site, one of the many online-only media producers on the list, was able to harness and engage consumers with their characteristically viral content. This was ultimately the deciding factor in who was more or less successful among publishers.

“All three are focused on publishing share-friendly content and getting it shared,” NewsWhip reports. “In particular the Huffington Post has shifted most effectively from its SEO roots to the current SMO reality.” 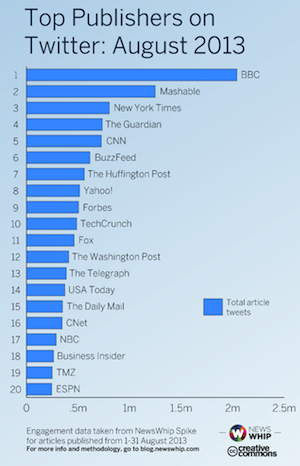 On Twitter, BuzzFeed slid to No. 6 on the list, with BBC, Mashable and The New York Times taking the top three spots showing the power of traditional media outlets and technology-news sites on that platform.

“The BBC’s content performed strongest on Twitter by a large margin with well over 2 million tweets for their 8,016 articles,” NewsWhip reports. “They’re followed by Mashable, with just under 1.25 million tweets.”

While Twitter’s total volume of social interactions is less than Facebook, the numbers speak to the shift in consumer interest and the knowledge desired. Still, with the use of various Twitter bots and automatic tweet feeds, the total number on the platform can be inflated, but to what degree remains difficult to identify.

What is clear, however, is that regardless of the content category, media publishers who invest in social engagement tactics can and will succeed in growing their consumer base and heightening their new media presence.