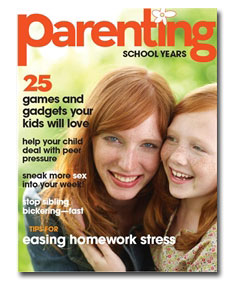 Bonnier Corp. recently announced that it will split Parenting into two separate editions—Parenting Early Years and Parenting School Years—early next year in order to better serve its audience.

Early Years, with a rate base of 1.65 million, will primarily target mothers of newborns to preschoolers, while School Years, with a rate base of 500,000, will focus on parents of kids in kindergarten through fifth grade. Together, the two editions will maintain Parenting’s 2.15 million rate base. The prenatal and infant stages will continue to be served by The Parenting Group’s family of Babytalk magazines.

According to Walter Rosenthal, consumer marketing director, The Parenting Group, the decision was based on extensive research conducted by its MomConnection research network over the past year.

“The issues of moms with school-age children, which differ significantly from those of moms with infants and toddlers, were not being addressed by the current offerings in the traditional parenting magazine category,” Rosenthal wrote in an email to CM. “By creating two editions that are highly relevant to the issues specific to each mom segment, we’re creating a much more engaged reader.”

Rosenthal adds that separating the magazine into two editions will significantly increase the potential for audience growth. “School Years will give us the opportunity to extend the average life cycle of a Parenting subscriber, since we’ll be able to market a new, more relevant edition to readers who might have otherwise let their subscriptions lapse once their children outgrew the traditional infant/toddler ‘sweet spot’ in our category.”

Parenting will launch a multichannel campaign to alert readers of the split in November via direct mail, e-mail and telemarketing, and the split will occur in February 2009. The current Parenting staff will work on both editions of the magazine, under the leadership of editorial director Susan Kane.