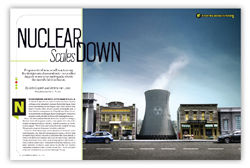 At the time of its sale from McGraw-Hill to Bloomberg in 2009, Businessweek seemed destined to fade away as so many weekly business magazines have.

However, with an aggressive repositioning under new editor Josh Tyrangiel and publisher Hugh Wiley, the reborn Bloomberg Businessweek (and sister title Bloomberg Markets) are once again content and revenue stars. Through the first three quarters of 2011, ad pages are up more than 20 percent for Bloomberg Businessweek, according to Publishers Information Bureau.

“We proved a lot of skeptics wrong,” says publisher Hugh Wiley. “All along we had said that part of the trick here was augmenting the resources of Bloomberg with the legacy brand of Businessweek, which now trades off of 2,300 journalists and 46 edit bureaus.”

Bloomberg Businessweek took two Eddie Awards in 2011, including one for Best Single Article for “What Amazon Fears Most,” a profile of Diapers.com, an online startup that was revolutionizing e-commerce. The article declared Diapers.com in a war with Amazon, which ultimately took the option of buying out the competition.

Bloomberg Markets won an Eddie for Best Full Issue for its Sept. 2010 issue. While the cover features a billionaire real estate entrepreneur offering an optimistic view of development in China, the most important story is called “Duping Families of Fallen Soldiers” by David Evans, according to assistant managing editor Mike Serrill. “It’s about how life insurance companies, when soldiers die in Iraq and Afghanistan, were sending survivors checkbooks, which weren’t really checks, instead of a life insurance payment. They were keeping the money and investing it,” says Serrill. “Only after survivors of dead soldiers went through great efforts were they sent a check.”

Bloomberg Markets also won best feature design for “Nuclear Scales Down”, a story that looked at the miniaturization of nuclear power plants around the country. The magazine commissioned an illustrator who came up with an image of a stereotypical Main Street with a nuclear power cone right next to a generic hardware store, as well as schematics on how they work.