Backstage Ties Print and Digital Together with Redesign
Website shifts focus to utility and tools and monthly uniques jump 60 percent. 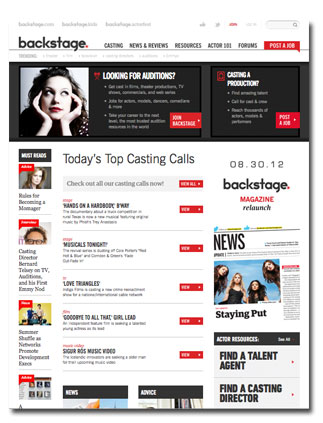 The niche magazine for the performing arts community, Backstage, has redesigned its print publication and website in an effort to stay ahead of its competition and a bit ahead of the curve—a move that seems to be working, so far.

“What we’ve tried to do with this magazine is take almost every part of it and lead it back to the Web,” says John Amato, chairman and CEO of Backstage.

The print publication will go from a tabloid size of 11.5 inches by 15 inches, to a 9 inch by 10.875-inch book. The magazine will have an increased paper quality with a glossy interior and cover stock. According to Amato, readers were asking for a smaller product so it could be easily transported to casting calls and auditions.

The print publication is also more integrated with the brand’s digital presence. A story with a casting director, for example, has links to Backstage’s career center in the magazine’s margins, alerting readers to “Find representation now.” Similarly, the margins surrounding an article on a new actor’s app encourages readers to “Find more essential tools and DIY tips at backstage.com.”

“We’re literally trying to incorporate how you process the magazine and interactions with Backstage online into one cohesive product that is Web and print,” says Amato. “I love print—it keeps you relevant as a brand, it gives you a currency that being online only doesn’t give you. [With the Web] we wanted to make it one experience.”

Though the print product hasn’t officially hit yet, the website has been live for more than a week and total traffic has increased by more than 25 percent; page views since the relaunch are up 35 percent; unique visitors are up 60 percent and message board traffic is up 65 percent.

“We made a site that is leading the user into the products and content that we’ve seen historically be the most helpful for our audience,” says Amato. “The things that were visited the most in the past, and have a historic presence and popularity on the site, things that we’ve seen through user surveys that have told us what is most helpful, we’ve tried to bring that to the forefront of the online experience.”

According to the company’s website, Backstage.com receives over 1.4 million unique visitors monthly and more than 5 million monthly page views, with the average visit lasting about 9 minutes. There are also more than 29,000 paid online members. In order to better serve this audience, the utilities that are popular on the site are highlighted in the print magazine, which is then used to drive people back to Backstage.com.  Additionally, the most trafficked areas of the site have been given a higher prominence on Backstage.com. 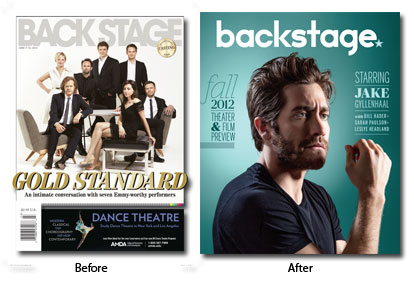 “We made our casting listings the focal point of the homepage,” says Amato. “That is the content that our audience needs the fastest access to and it’s also the most refreshed and relevant. We’re bringing actor resources to the forefront—how to find an agent or casting director—and giving that a larger presence on the homepage.”

The site still delivers industry related news, information and content, but the tools and utilities for the audience are claiming the most prominence. Amato says this will likely not harm the site because of the way the audience consumes Backstage.com content when compared to tool usage.

“They get our news, probably more often than not, through our social media streams and daily email,” he says. “There, we only feature our content. What we want to do is keep a lot of the homepage for utilities so it’s helpful for actors, though the news is not hard to find there.”

“We’re reinventing how people look at content, and keeping it fresh and making sure people know that if they’re looking for foundational acting advice they can also go to Backstage.com and see our legacy stuff, which is really helpful,” says Amato.