Apple News+ Won’t Save Magazines. That’s Not Such a Bad Thing.
If the future depends on a place, and an audience, that rewards magazines’ aesthetics, maybe Netflix isn't the platform to imitate. 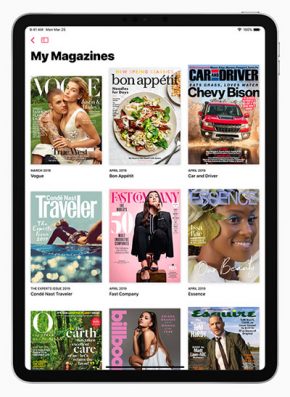 I don’t think we’re there yet.

Oh, there was no shortage of optimism when Apple announced the Netflix-ization of printed matter. The pantheon of publishing muckamucks mouthed all of the expected sentiments:

Tom Harty, president and CEO of Meredith Corp.: “Apple News+ validates the power of premium content from great and trusted brands, and being a part of it makes good business sense. Apple News+ will be an extremely valuable mass platform to attract new paid subscribers to our titles.”

Troy Young, president of Hearst Magazines: “At Hearst Magazines, we are hyperfocused on creating consumer value through our storied brands, high-quality content and great experiences. Apple News+ amplifies our ability to do this in a premium environment with a key audience, elevating the digital magazine experience for millions of iPhone, iPad and Mac users.”

Bob Sauerberg, then-president and CEO of Condé Nast: “We’re constantly innovating how we connect with our audiences and bring them the content they crave on the platforms they use every day. Apple News+ represents an exciting opportunity to bring a premium experience to millions more readers, so they can enjoy the conversation-shifting journalism, influential points of view and unparalleled visual storytelling they’ve come to expect from our brands.”

If you read carefully, you’ll notice that none of them really promises—or even says—anything at all. Which is about right, if you ask me.

Let’s put aside the technical bugs—PDF conversion, etc.—that have bedeviled some of the initial participants. Onboarding new platforms is seldom a smooth process. Those issues will doubtlessly work themselves out. Likewise, the complaints of two-tier levels of attention by Apple: one degree of support for the big players, a much lower level for the long tail. The newsstand concept doesn’t work without a big variety of titles, so it’s unimaginable that Apple would be so neglectful for long.

No, the issues (ahem) lie elsewhere.

Let’s begin with scale, which is at the heart of the subscription aggregation model. Many exclamation points have been pointed at the eye-popping 200,000 subscribers signed up in the first two days. Gosh!!! If that trend were to continue, there would be 36.5 million subscribers in the first year. In 10 years, everyone in the U.S., and by the year 2219 everyone in the world. Which would be, you know, pretty good reach. Plus flying cars. But can we think about that for a moment, beginning with what success really looks like?

Publishers are crossing their fingers and wishing really, really hard that Netflix-style magazine streaming creates three solid revenue sources: 1. From Apple, which will divvy up half the subscription revenue among the titles on the service. 2. From individual subscriptions flowing in from satisfied samplers. 3. From advertisers enjoying more reach.

Maybe. The deal is a better deal than what aggregation usually yields, but a windfall it is not. Let’s just take my joke example of 36.5 million $10-per-month subscriptions in the first year. If the current 250 participating titles remained steady, that would yield an average of $8.76 million per title. Not game changing, but not too shabby. Except:

In short, from a business standpoint, no great, long-term advantage would seem to accrue to any of the partners in this enterprise. Perhaps this is why those big publishing wheels were reduced to jargon-heavy P.R. speak. Or perhaps the reason is more serious, and more fundamental still—a structural impediment painful even to contemplate.

The Apple News+ user experience, like much magazine content online, is by and large quite vivid. The layouts, in many cases, truly jump off the screen. It is very, very magazine-y.

But, oh man, is that necessarily a benefit? Yes, it replicates the experience of leafing through paper magazines, with rich design not only graphically striking but also enticing—drawing pagers-through into a particular title at the newsstand, or story in an issue. It’s elemental to analog magazine publishing. But does it comport with the smart phone experience? Surfing for web content, after all, isn’t the same thing as perusing titles on a newsstand. Online, we have been conditioned—or are perhaps pre-wired—to respond to immediate relevance and interest. When you scroll on your phone, do you stop for design? For font? For vivid art? Or, rather, instant cues as to the substance of the article?

The question I’m asking is whether the central aesthetic appeal of magazines—evolved over two centuries in the analog world—even translates online. Or are these unique and core benefits now merely speed bumps—gorgeous speed bumps—slowing us in our desire for the most urgent or entertaining words on the page?

Yes, it is a difficult question to contemplate. But it must be faced. If the artistry of magazines has been rendered largely vestigial by technology, where does that take us? If the future depends on a place, and an audience, that rewards magazines’ aesthetics, maybe the platform to imitate is not Netflix.

If it were up to me, I would be crossing my fingers and instead thinking really, really hard about Pinterest.