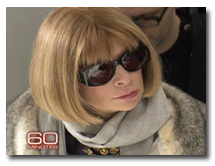 The numbers are in: Vogue editor Anna Wintour’s highly-anticipated 60 Minutes profile drew 10.2 million viewers for CBS on Sunday, according to Nielsen’s rating data released today.  That’s about a million more than NBC’s Dateline drew for its exclusive interview with ailing actress Farrah Fawcett on Friday.

Executives at CBS are said to be pleased by Wintour’s draw—6.4 percent of U.S. households were tuned in, generating a 12 percent share—considering the weekly show, which airs at 7:00PM EST, is on while it’s still daylight. (A 60 Minutes interview with Barack Obama in the darkness of November, for instance, drew 25.1 million viewers.)

It’s unclear how many more online viewers the piece drew—though it was picked up by blogs including Gawker, New York magazine’s “The Cut” and Radaronline, among other outlets.