AMC Day 2: Reality Sets In Around Print Challenges
“Print will eventually go away," one speaker said. 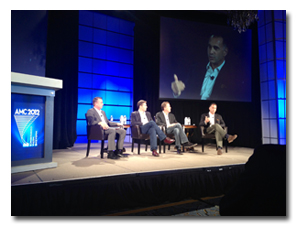 One of the first speakers of the day—Ben Horowitz, technology entrepreneur and co-founder of venture capital firm Andreessen Horowitz—suggested that print will likely vanish completely as today’s younger consumers become the dominant generation.

“Babies born now will never read anything in print,” he told the audience of publishing executives. “At the same time, people in their 40s and 50s will never stop reading print.”

“Face the reality that print will eventually go away," he added.

Horowitz, who was being interviewed by Norman Pearlstine, chief content officer for Bloomberg LP and chairman of Bloomberg Businessweek, said that older audiences are passing away and people born in 2012 and beyond, will never be print enthusiasts, essentially cementing the end of an era.

“There is going to be a new business for us,” said Horowitz. “Anytime you change businesses, or go into the innovation business, the horrifying thing about it is you think you’re right but you don’t really know—you may well fail.”

Due to the extreme rate of change, Horowitz said, there is a great deal of room for innovation, something the media industry is just beginning to grapple with, since, he says, there hasn’t been a large change in print media since the introduction of the printing press.

“The business evolved at a much slower rate than other content businesses that have been affected by technology,” he said. “It’s not that fewer people are reading, but the structure of the business is not going to be the same.”

The morning’s second speaker, Dr. Jeffery Cole, research professor and director of the Center for the Digital Future at the University of Southern California’s Annenberg School, presented a similar scenario—print, he predicts, will eventually go away.

Dr. Cole estimates that some magazines—likely fashion titles—will always remain in print, as will those with strong design principles. However, he added, the majority of others will see their printed roots begin to completely break down by the end of the decade.

“About 30 years ago, we saw that teenagers didn’t read newspapers until they got into their 20s and 30s,” he said. “Today teenagers don’t read newspapers and the evidence is clear they never will. Teenagers today around the world are more interested in news than any teenage generation in the last 60 years. They’re just not going to newspapers, but online to get their information.”

While different, Dr. Cole used this example to highlight the fact that newspapers have not made the transition to digital quickly enough, and every time one of their readers passes away someone else is not replacing them. For magazines, the “imminent collapse” of the U.S. Postal Service, social and online media, and a change in consumption habits is hurting print’s ultimate survival—a key point that Dr. Cole said needs to be plainly accepted.

“Borders is now gone, the Australian Dymocks is in serious trouble, and for Barnes & Noble, if they survive, it will not be as a book store but as a tablet company with their NOOK,” he said. “That’s how quickly it changes.”

Aside from Dr. Cole’s and Horowitz’s tough love, other AMC speakers highlighted the many aspects of the digital shift. Phil Wiser, chief technology officer for the Hearst Corporation (pictured far left), for example, said that last year was the first time that the amount of time online equaled or exceeded the amount of time spent on television.

“It’s been a morning of reality and facing a few things,” said Wiser to the audience. “We can capture consumer attention with a different model and a different proposition—changing the game in terms of the consumer offering can get their attention and get them to engage in ways they had not previously.”

Wiser added that there is good news from Hearst—the company has over 700,000 paid digital subscribers and 80 percent are brand new customers. Engagement on these digital editions is also high, with a 70 percent open rate, climbing as high as 90 percent for some titles.

“There’s an opportunity here in getting consumers to think differently and capturing their attention,” said Wiser. “We’re seeing now that engagement on a daily basis is changing from the way it used to be—we need to be there everyday, in their faces and getting their attention.”

Wiser added that when consumers are at a checkout line in front of a newsstand they are not looking at brands but at their smartphones—another reason why publications need to engage to capture a reader’s attention. Panelist David Zinczenko, editor-in-chief of Men’s Health and Women’s Health, said that’s why his brand has rolled out full versions of its publication onto mobile phones.

“Our primary arena used to be the newsstand, now it’s a media multiplex with many different screens,” he said. “We have to figure out what is optimal for each channel.”

Multi-screen publishing, and perhaps a shying away from a traditional print focus, the day’s speakers emphasized, will be vital to the future.

Google Play, he said, started as an app store but the experience has become more customized and broken out by tabs. Unlike Apple’s App Store, Google Play’s store is segmented by music, books, magazines, movies & TV and Android apps. In this way, magazines are not competing with gaming apps or films, but just with other titles.

Dougall added that in order to be successful, no matter the platform, magazine publishers need to look for a digital solution for their products, but avoid becoming technology companies themselves.

“I think the best kind of challenges are the challenges when the facts are on our side,” said Berner, still optimistic in closing remarks. “Magazine media audiences are engaging with us more and more, and we’re able to deliver them our content through more and more platforms, which is a good thing. Yet, we have an economic disconnect between the size of our audience, the depth of their engagement, and the perceived value that advertisers are currently placing on magazine media, especially print. The MPA will be laser focused to do everything possible to eliminate what is really a gap that is pushed by a perception of reality. We will be relentless, focused and loud about pushing forward our collective agenda.”