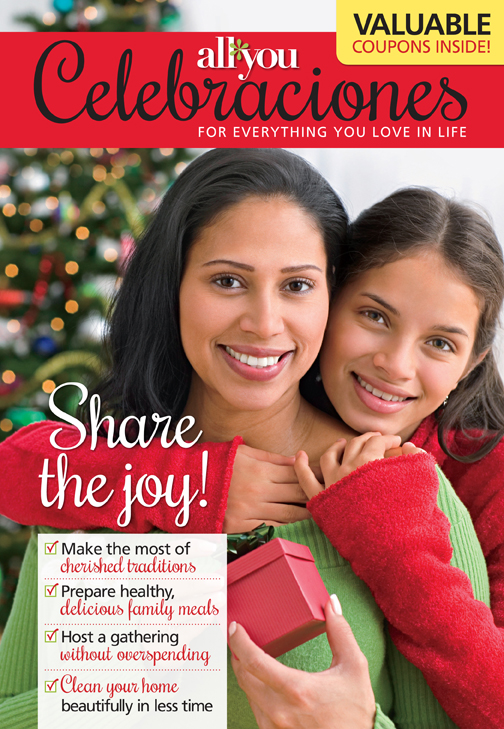 Time Inc.’s All You is looking to increase its penetration into the Hispanic women’s market with a multipoint holiday campaign.

The magazine, aimed at practical, price-conscious consumers, is publishing a 12-page custom insert in the December issue, along with several mobile, social and digital components that will run through the first week of January.

Diane Oshin, group publisher for All You, says the magazine’s audience is 11 to 12 percent Hispanic right now, trailing the overall population by 4 to 5 percent. She’s hoping to narrow that gap with this effort.

"We thought we were doing a really good job in serving this market," Oshin says. "If you look at our visuals—digitally, in the magazine, in any books, anything—you will see quite a diverse picture of women."

"[But] it was not doing the job," she continues. "We recognized that it was not just about being inclusive visually. You needed to have the voice and the cultural cues of a Hispanic or Latina community."

The special issue is incorporating that voice and those cultural cues by turning to notable Latina bloggers for content—a community-driven content strategy that’s falls in line with the traditional editorial featured in All You.

Oshin also noted that their research has shown high mobile and social penetration among Hispanics in the magazine’s target market. As such, they’ll have Latina contributors participate in Twitter chats and will highlight content (and the campaign’s sponsor, Nestlé) in multiple positions on the mobile site.

While All You will publish the content in English, Nestlé’s ultimate aim is to drive traffic to a Spanish-language site*, El Mejor Nido ("The Best Nest," in English). Is that a conflicting goal?

"Our marketers make their own decisions about that representation," Oshin says. "We were quite diligent about whether we wanted this to be in Spanish or English, and everything that we learned about the community, even in homes where they’re bilingual, they [read in English]. We have so many young consumers and moms, and it’s a next generation that is much more acculturated than the prior generation of Hispanics. We took a forward-facing perspective and wanted to be sure we were going to be relevant with these young moms moving ahead."

All You will distribute 380,000 copies of the special issue to a mix of qualified subscribers and newsstands in key Hispanic markets.

The magazine has seen total circulation rise steadily since 2008, currently standing at more than 1.5 million subscribers, per the Alliance for Audited Media. Ad pages have fallen since then though (as they have throughout the rest of the industry), dropping 5.6 percent year-over-year for the first three quarters of 2013, according to PIB. A spokesperson from All You says the magazine is up 6.05 percent in November however, and expects a 25-percent bump in December.

*Editor’s note: Neslé also does provide an English-language version of the site, at elmejornido.com/en.