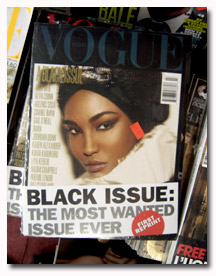 When Italian Vogue announced that its July issue would feature all black models, it caused a relatively major stir in the fashion world. Now that the issue has arrived in the U.S., it seems to be causing a major publishing stir, too.

Historically, the conventional wisdom—and circulation and newsstand wisdom—in consumer publishing has been that putting an African American (model or celebrity) on the cover of a fashion magazine means that it “just won’t sell” well.
Not anymore.

Following a couple weeks of New York newsstand sell-outs (something I experienced first-hand last week at a popular storefront on Spring Street), various reports of frenzied, cross-town searches for copies (this is no small feat, considering the magazine is selling for $16 to $20 per copy) and the accompanying hype, Condé Nast has decided to reprint the issue—10,000 copies polybagged with the tagline “Most Wanted Issue Ever” and “First Reprint” banded across the front.

Undoubtedly, some will accuse the magazine of using black models as a publicity stunt, a marketing gimmick. But the execution of the issue’s editorial proves otherwise. As the Gawker Media blog Jezebel pointed out, “Never has the racism issue looked quite so stunning.”

London’s Telegraph called the issue a “statement against discrimination in the fashion world.” And it is. But there’s clearly a long way to go—and not just among magazine publishers.

Advertising pages were up 30 percent for the July issue, but there was a “glaring lack of black models” in them. Steven Meisel, the photographer for the issue, said: “I’ve asked my advertising clients so many times, ‘Can we use a black girl?’ They say no. Advertisers say black models don’t sell."