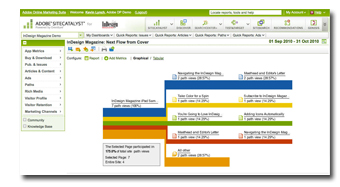 Back when I was editor of PC World, creating a magazine that newsstand buyers and subscribers loved was one of the great pleasures of my job. It was also something of a dark art. There were plenty of signs we’d succeeded: issues flying off the stands, renewal rates staying healthy, high scores in the pricey reader surveys we conducted. But in the end, connecting the dots of reader satisfaction was difficult, and agonizingly slow.

(The closest I got to instant gratification, incidentally, was when I traveled on an airplane and happened to sit next to someone who was reading PC World. Rather than introducing myself, I’d peek out of one corner of my eye and see which articles my neighbor lingered on, and which ones he or she skimmed right past.)

On the Web, things are different.  Analytics services such as Omniture let editors and other media types see what’s getting read, what’s getting ignored, and how consumers navigate through everything a site has to offer. They let you make decisions in real time, rather than waiting for months.

At Adobe’s MAX conference in Los Angeles this week, the publishing software company is announcing its Digital Publishing Suite, the fully-commercialized version of the system that Wired, The New Yorker, and other publications have been using to create iPad versions of their magazines. It’s rolling out in pre-release form for publishers who’d like to try it out; the final version is due in the second quarter of 2011.

The Digital Publishing Suite aims to be a comprehensive solution for turning traditional magazines created in InDesign into digital publications that can be distributed to devices of all sorts. But the one aspect that intrigues me most is this: It includes Omniture analytics for digital magazines. (Adobe acquired Omniture a year ago for $1.8 billion.)

If you use the suite to produce tablet versions of your magazine, you can use the analytics service to get a bevy of information about how they’re being read—all aggregated and anonymized to avoid privacy issues. You can see whether readers are opening the issues they’ve bought. You know which stories they’re jumping to, and whether they tap through every page of an article or abandon it after the first one. You can confirm whether they’re watching ambitious multimedia elements such as embedded video. And you can tell whether they’re reading front-to-back, back-to-front, or hopping around randomly.

It sounds like a goldmine of useful information that publishers could use to make publications that serve their readers better. And much of it might help with a magazine’s traditional, dead-tree version, too—I suspect that there’d be a correlation between covers that prompt tablet subscribers to open the issues quickly and ones that are newsstand winners.

Analytics can’t tell you everything you need to know about your readers’ relationship with your content. Seeing that a lot of people chose to read a particular article, for instance, says nothing about whether they liked what they got once they finished. So traditional research such as surveys and focus groups still have their place, and free-form feedback such as reader comments on online versions of stories can be very useful. But I know that if I were editing a magazine with digital editions produced with Adobe’s suite, I’d be hungry for the new clues about reader behavior that these analytics could provide.