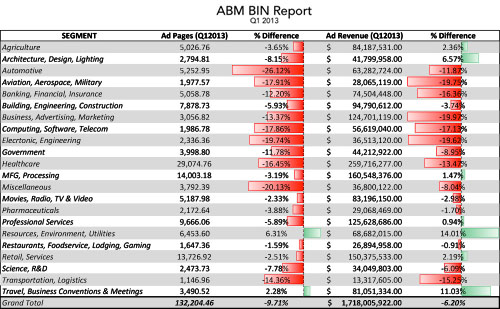 Just two of 22 b-to-b media verticals showed ad page increases in the first quarter of 2013, according to the latest ABM BIN report.

Though the industry averaged an ad page loss of 9.7 percent year-over-year, the Resources, Environment and Utilities segment grew 6.3 percent, while Travel, Business Conventions and Meetings publications had a 2.3 percent increase. The Automotive and Miscellaneous segments took the biggest hits, each losing more than 20 percent of its ad pages.

The 9.7-percent average ad page loss is the worst Q1 performance since 2009—then, pages dropped close to 30 percent in the midst of the recession. Losses slowed in each of the following two first quarters before 2012, when b-to-b publications saw a 7.25-percent decrease. Monthly averages have typically ranged between 9 and 12 percent since then.

April’s numbers were also released with the Q1 report. Both ad pages (down 9.2 percent) and sales (down 5.5 percent) continued to fall in the month, but at a slower pace than the first three months of the year.

Meanwhile, consumer magazines posted a 4.5-percent loss in ad pages in Q2, according to the first half numbers from PIB. The industry appears to be recovering however, reducing losses in each of the last three quarters.