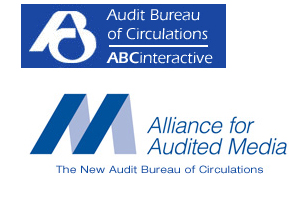 In another sign of how the shifting media landscape is changing the way companies operate within it, the Audit Bureau of Circulations has announced it’s rebranding to a less print-focused name of Alliance for Audited Media.

The new identity is representative of a number of initiatives the auditing firm has been rolling out that address the multiplatform content and audience realities publishers are working with, most notably its Consolidated Media Report, which allows publishers to verify their cross-platform metrics.

According to AAM, more than 100 publications have released CMRs so far this year, double the number last year.

"With advancements in the media industry and the progress our organization has made in developing new digital audit services and cross-media expertise, we felt it was time to refresh our brand to better reflect our strategic role in the new world of media," said AAM president and managing director Mike Lavery in a statement.

The announcement of the rebranding came during AAM’s annual conference today in New York. During the announcement, Lavery outlined eight continuity "AAMbitions" which notably included pursuing acquisitions to bolster the firm’s services.

According to the organization, the new brand initiative was endorsed by 94 percent of its members who voted on the change.

Along with the rebranding, AAM’s site has been relaunched at Auditedmedia.com.

The organization simultaneously announced that it has certified Adobe’s Digital Publishing Suite, making it the first publishing software platform to have that recognition by AAM. Specifically, DPS’s analytics that are collected via its Content Viewer and SiteCatalyst features are now verified.