In early May, during an otherwise unassuming panel at the Independent Magazine Group’s annual conference in Boulder, Colorado, Bryan Welch, publisher of Topeka, Kansas-based Ogden Publications, made a surprising case for the lower end of newsstand efficiency. “If you’re profitable at, say 28.5 percent,” Welch said at IMAG, “why push for more?”

“My concern was, ‘efficiency’ is a great sounding word,” Welch says. “But I was listening to all of these publishers—it sounded like everybody’s just drunk this Kool-Aid.”

Welch’s formula goes something like this: “Let’s say your magazine has a newsstand draw of 100,000 copies—and a 49 percent efficiency rate,” he says. “When all is said and done—not including the ad revenue and product revenue—you have $50,000 of net income.
“If you add another 100,000 copies to the draw,” Welch continues, “you might have a 28 percent sell-through on those copies.” Your overall efficiency would drop to 39 percent but your net revenue would increase. “That adds another $20,000, right to the bottom line.”

The drumbeat from publishers advocating high newsstand efficiency, above all else, is misguided, according to Welch.

“Publishers need to understand the economics of their newsstand operations,” he says. “Having an extraordinarily high efficiency is not always good for our business—in fact, it is bad for our business.”

True, most publishers would take an additional $20,000 in revenue at the cost of a lower efficiency—particularly in this economy. But shouldn’t the industry strive for both? “What I’m saying is, to (sell) 200,000 copies, and only produce, say 210,000, you’d need an overhaul of the entire system to make that miracle happen.”

Ogden’s newsstand sell-through is about 38 percent across all of its titles, Welch says, noting that all of Ogden’s magazines are printed on 100 percent post-consumer recycled paper, and that “more than 80 percent” of the unsold magazines are recycled.

“Bryan’s a bright guy,” says John Harrington, noted newsstand expert and publisher of the New Single Copy. “He may be right from an economics standpoint. The numbers work for a lot of publishers—they can make a lot of profit with efficiencies at less than 28 percent. The question, though, is how much stress and strain are they causing on the distribution channel?” 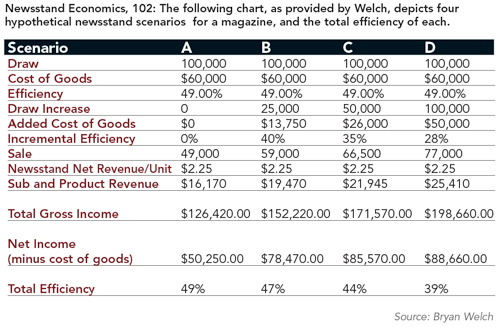 A lot, says Welch. “The wholesaler is still having to handle those 70,000 unsold copies,” he says, noting that the industry’s relatively efficient system of recycling magazines could become less so soon, as the industry that was buying most of the magazines’ recycled waste—the building materials industry—is in the throes of its own slowdown.

The other part involves subscriptions generated by newsstand copies.

“The subscriptions sold through sub cards in newsstand copies—they are much more efficient and environmentally-friendly than direct mail, which has something like a 2 percent efficiency,” Welch says.

Here, Harrington agrees. “When you mix in the revenue from subscriptions generated from these copies, it becomes vital for some publishers.”