The 2014 City & Regional Magazine Survey
How long can print carry the market? 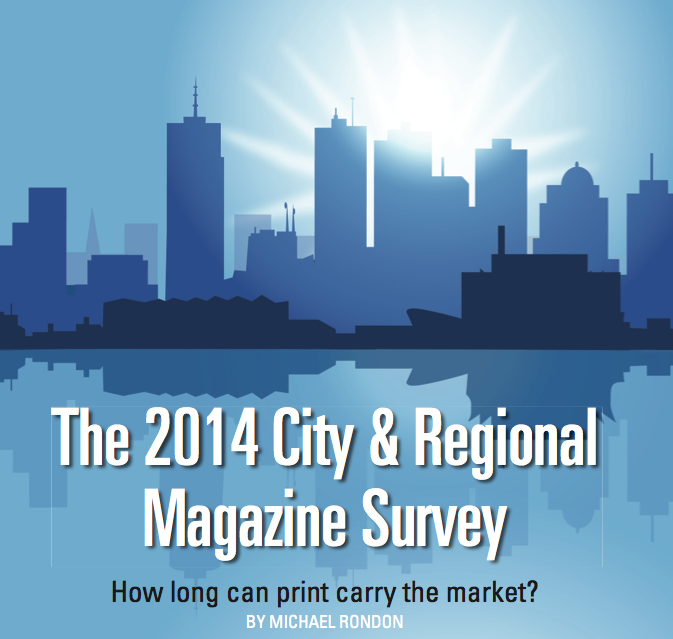 Companies aren’t shying away from it either—more print products are scheduled to launch in 2014 than at any point in the last 5 years.

Is that a good thing though? How long can that model be sustained? 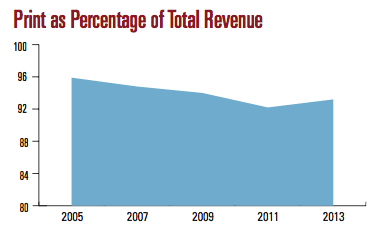 Along with the rest of the publishing industry, print peaked in the mid-2000s for city and regional magazines. It accounted for up to 95.9 percent of overall revenue in 2005, but it hasn’t dipped far from that point. While custom publishing contracts have taken the place of a few ad dollars, the print-to-non-print revenue ratio is just a few points off where it was 10 years ago. The numbers are almost exactly what they were in 2008.

A few publishers are predicting a shift away from print and toward alternative revenue streams—digital media and events, chief among them—in 2015 however.

And they seem to hold long-term promise. Launch rates for non-print products are actually down this year, but companies are getting better at squeezing revenue out of the ones they have already. More than 85 percent of respondents say their non-print products will bring in at least some money this year—a number that’s steadily risen since 2010.

Print still pays the bills for city and regional publishers. Respondents say more than three-quarters of their revenue still comes from print advertising.

The good news? Overall, it’s stable. That 77.1-percent chunk is less than a percentage point away from the 5-year average.

There’s a big gap between magazines that generate more than $5 million in revenue and their smaller counterparts though. Large brands have been able to develop other streams of income, relying on ad pages for just 65 percent of their earnings in 2013—down a full 5 percent from where they were in 2011.

Smaller publishers have had a tougher time diversifying. They’re still counting on print ad sales for more than 80 percent of their revenue. That figure has remained essentially unchanged over the last 4 years.

The revenue mix could change soon though. Smaller magazines, in particular, expect print ad revenue to make up a slightly smaller percentage of their overall earnings this year, projecting a 3-percent decrease. The amount isn’t huge, but it’s an important trend to watch for.

Paid subscriptions, digital media and events are expected to grow in its place, with respondents from small publishers forecasting year-over-year increases of at least 15 percent for each segment.

Not surprisingly, large publications are also looking to digital media for growth. Respondents project revenue from digital platforms will jump 28 percent in 2014, bringing the overall slice of revenue to almost 9 percent of total earnings. 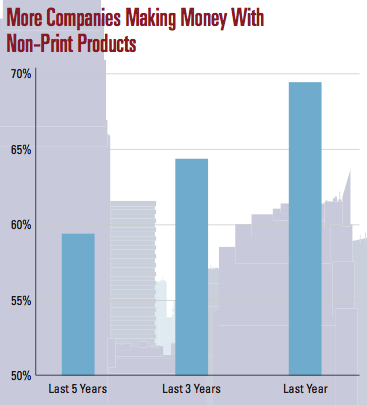 Evidence suggests that the new digital business could be coming from better monetization strategies rather than the launch of more products.

In fact, fewer digital products will likely enter the market this year than in any of the previous 5 years. The percentage of companies planning to stand pat with their current non-print portfolio (59 percent) is actually rising.

At the same time, more companies are expecting to generate revenue from non-print products than ever before. Nearly 70 percent of respondents say they’ll generate at least some money from their non-print efforts, up from less than 60 percent in 2010.

The amounts they’re making have stayed flat—just a third earn more than $25,000; that’s been consistent over the last 5 years—but more are churning out incremental revenue. The percentage of companies making less than $25,000 from non-print products has climbed to 38 percent, 10 percent above the 5-year average.

It’s important to note that "non-print" doesn’t necessarily translate to "digital." Digital products are a part of a company’s non-print portfolio, but so are events and data and information sales. Digital media is a significantly larger revenue generator than either of those segments though.

PRINT IN THE PIPELINE

Close to 40 percent of the publishers surveyed say they plan to unveil a new print product this year.

Big deal, right? That’s the same amount that said they’re launching a non-print product in 2014. Take a look at the trendlines for each though. 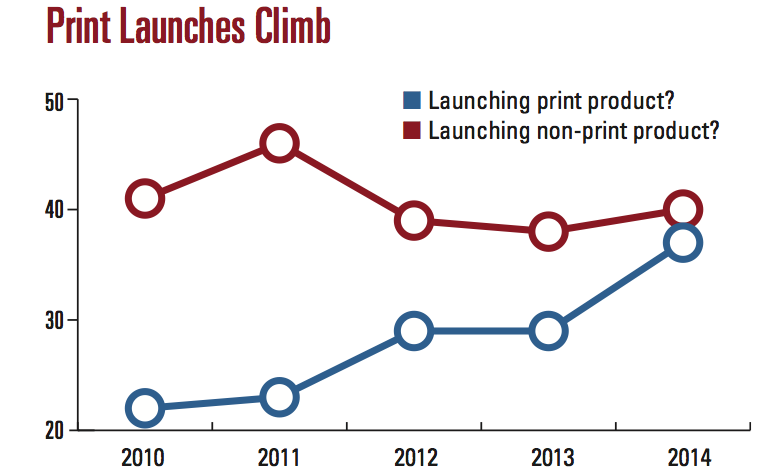 Print launches are climbing fast—nearly double what they were in 2010 after a spike this year—while non-print product debuts have flatlined.

And it’s not just respondents’ publications that are growing. There’s more competition. Each city and region- al market surveyed has an average of 2.9 local titles now, up from 2.7 in three of the last four years.

Big publishers are especially bullish on print. More than half of them say there’s a paper-and-ink product in the pipeline for this year. 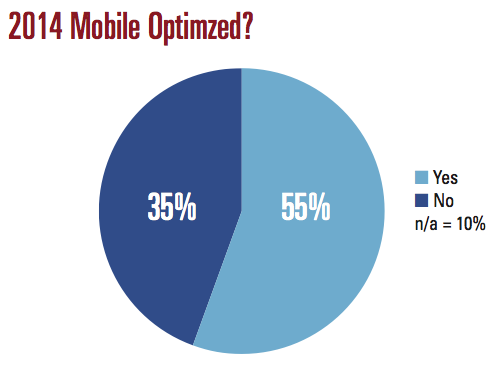 With print still playing such a large role for city and regional publishers, it’s no surprise mobile isn’t a priority yet.

The percentage of local titles with a mobile-optimized website climbed to 55 percent in 2014—up from 44 percent last year—but that still means a lot of readers are still pinching and zooming for city and regional content on non-mobile sites.

Print or not, more than half of respondents’ companies are planning to spend money on a launch of some type in 2014—above the 5-year average.

Dollar amounts are rising as well, with a third of respondents saying they’ll invest at least $25,000 in product launches this year, up from an average of about 25 percent since 2010.

Raw expenses have also climbed about 3.5 percent across the board. Sales stood out as the cost center with the biggest increase, with expenses jumping 5 percent. Along with sales, production, digital media and editorial each had expense hikes above the norm.

Interestingly, distribution and circulation—two charges closely tied to print—saw relatively minor increases. It’s just one factor, but it runs counter to the narrative of city and regional magazines’ continued reliance on print.

SPIN-OFFS MAKE A COMEBACK…SORT OF

More city and regional magazines are producing spin-off titles than at any point since 2010. Close to a quarter of respondents say they’ve launched a supplementary magazine in the last 3 years. Those new titles are generating less revenue than they had been though. Mean earnings from spin-offs was just $152,000 in 2013, down from $187,000 over the last 5 years and from $194,000 since 2012.

Spin-offs aimed at luxury and relocation/newcomer segments have been the most popular launches recently.

Methodology: The margin of error for percentages based on 97 key respondents is +/- 9.3 percentage points at the 95 percent confidence level.