The 2013 City and Regional Magazine Survey
Regional magazines continue to stick to their print-centric roots.

According to the data from FOLIO:’s 2013 survey, city and regional magazines, in general, remain an anomaly in the magazine media world. This is mainly due to the fact that digital revenues have been stuck in the mid-single digits. Events, another big revenue contributor in other magazine verticals such as b-to-b and consumer, throw off even less revenue. In other words, the city and regional magazine category has remained steadfast in its print-centric outlook. 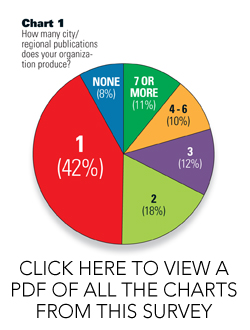 There are exceptions to this rule, of course. Plenty of regional publications have built out significant, localized event operations and are making progress with expanding their digital efforts in both content production and new ad revenue.

Texas Monthly, for example, has redesigned its website and magazine, and the site now benefits from daily content updates from writers and editors who work on both the magazine and the site. The magazine has also benefitted from a content syndication deal with the Texas Tribune and The New York Times in which Texas Monthly contributes cultural content to both brands.

Meanwhile, the brand has launched a native advertising strategy by offering a sponsored content option for advertisers. “The idea of sponsored content fits in with our broader business goals and that was to introduce more variety to the site by offering more than just display,” says Sam Martin, Texas Monthly’s director of digital strategy.

That’s not to say the category is healthy on the whole. More launches mean more competition, and that’s just from the print side. All this puts even more pressure on current publishers to begin to diversify revenue streams.

Well-regarded title Maryland Life, published by Great State Publishing, shut down mid-July due to a shrinking advertising pool. Many markets can become saturated with titles, particularly regions that have an affluent population, which quickly deteriorates each brand’s share of marketing dollars.

“When you have that proximity, that geography, and quite frankly we’re a wealthier state, we have a lot of smaller regional magazines in this area,” says Dan Patrell, publisher and editor-in-chief of Maryland Life. “No one would compete with us directly, but indirectly, it’s always a bite out of the advertising pie.”

The Revenue Breakdown
Most of the magazines represented in this year’s survey have either a paid (39 percent) or controlled (25 percent) circulation model, according to responses. Titles are predominantly smaller-market, making between $1 million and $2.9 million in overall projected revenue for 2013.

According to respondents, 2012 revenues, by far, came from print advertising, which averaged 76 percent. The remaining 30 percent of revenues were divvied up between digital, events, custom publishing and paid subscriptions, among others.

This mix is essentially expected to repeat for 2013. Print advertising, respondents say, will be about 71 percent of revenues. Digital will bump up slightly from 4.2 percent last year to 5.2 percent this year. Paid subs will remain flat, as well events.

New this year is the mobile/tablet category. At 1.3 percent of revenues, it’s barely a blip on the radar screen, but it remains to be seen whether this category will take on the same significance it has for the b-to-b and consumer magazine markets.

Expenses
Meanwhile, operating expenses are creeping up. Interestingly, and perhaps alarmingly, e-media expenses are the highest, when comparing 2011 and 2012, at a 4.7 percent increase. This exceeds the expected increase in revenues between 2012 and 2013 in the same category.

Mobile and tablet expenses bumped up as well, showing continued investment in this sector, but again, the expenses may be overshadowing the platform’s revenue contribution, which is only 1.3 percent of the pie.

New Launches
The market is not expected to grow with new print product launches from existing publishers. About two-thirds of respondents indicate no plans to launch any new print titles this year. That ratio contracts a bit, however, when asked whether they’re planning any new non-print launches. Thirty-eight percent of respondents are planning a new, non-magazine launch this year.

Looking back at non-print launches over the last three years, they tend to be in the social media, tablet, live events and digital sectors. Two-thirds of respondents said they launched new social media-based initiatives in the last three years, but digital editions, tablet apps, live events, websites and even video were also significant investments during that period.

Mobile
Mobile is catching on. Forty-four percent of respondents have optimized their websites for mobile—a significant number—while almost half have yet to do so. This is good to see and reflects the growing importance of mobile. Publishers from every market sector are showing mobile as a huge traffic referral source and are quickly increasing their content and technology investments to capitalize on it.

Methodology
The survey list of 1,068 included all those who indicated on the FOLIO: subscriber form that their company’s primary focus is city and regional publishing.

Data was collected via mail survey from March 6 to April 17, 2013. The survey was closed for tabulation with 198 usable responses—a 19 percent response rate. To insure representation of the audience of interest, results have been filtered to include only the 182 individuals who indicated on the survey their organizations are involved in city/regional publishing. The margin of error for percentages based on those 182 responses is +/- 6.6 percentage points at the 95 percent confidence level.